A smaller Air Force with aging aircraft plans to fly its KC-135 refueling tankers — eight of which are operated... 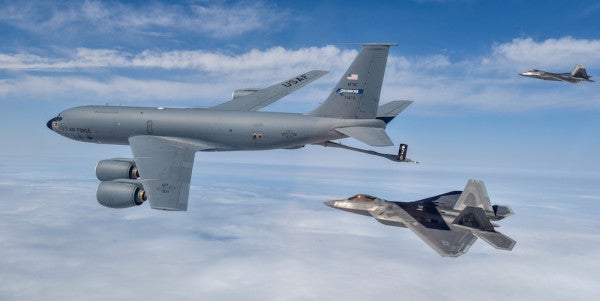 A smaller Air Force with aging aircraft plans to fly its KC-135 refueling tankers — eight of which are operated by the Hawaii Air National Guard at Joint Base Pearl Harbor-Hickam — for another 30 to 40 years.

The Boeing four-engine Stratotanker, similar to the 707, celebrated 50 years of flight in 2006. To put its longevity into perspective, the tankers replaced the propeller-driven KC-97, which couldn’t keep up with fighter jets and bombers.

Gen. Carlton Everhart, who stepped down as head of the Air Force’s Air Mobility Command in September, said last year that “we face serious challenges within our fleet and our Air Force.”

“The nation faces a resurgent Russia and a rising power in China, with new warfighting approaches and ultra-modern weapons,” Everhart told a defense writers group. “Yet we are projected to fly the KC-135 until it’s at least 100 years old before I can get that airplane totally replaced with a new tanker.”

A new report by the Congressional Budget Office said the Air Force has about 5,600 aircraft ranging in age from just-delivered to 60 years old.

“Many of those aircraft — including the costly-to-replace F-16C/D, F-15C/D fighters, F-15E multirole fighters, C-130 cargo aircraft and B-1B bombers — are nearing the end of their service life,” the budget office said.

The Heritage Foundation said in an October report that Air Force capacity, in terms of the number of aircraft it has, has been on a constant downward slope since 1952.

“Adversaries are modernizing and innovating faster than the Air Force is, jeopardizing America’s technological advantage in air and space,” the foundation said.

According to the group, that capacity loss has included reductions in cargo-carrying and older fighter aircraft to ensure the Air Force’s top three modernization programs — the F-35A Joint Strike Fighter, Long-Range Strike Bomber and new KC-46 refueling tankers — are preserved.

The Air Force plans to keep its fleet of about 400 KC-135 tanker-transports flying for decades more even as it is about to bring into service the new KC-46 refueling tanker, based on a Boeing 767, but in numbers less than expected due to budget cuts and cost overruns.

A total of 179 of the new refueling tankers are anticipated to eventually replace about a third of its aging refueler fleet comprised mostly of KC-135s, according to the Government Accountability Office.

The KC-135s may even refuel the new KC-46s to extend the air bridge for other aircraft, the Air Force said.

As part of budget cuts, the Air Force in 2014 announced that four KC-135s and the active-duty 96th Air refueling Squadron would depart Hickam, returning the number of planes to eight from 12 that had been there since 2010.

No major upgrades have been made to the Hickam KC-135s in a couple years, officials said. But Air Force-wide, digital avionics upgrades were installed and testing is under way on a laser countermeasure pod to disable some incoming missiles.

SEE ALSO: An Airman’s Simple Fix For The 60-Year-Old KC-135 Could Save The Air Force Cool Million