Having already written off $3.7 billion on the Air Force tanker program over the past six years, Boeing said Thursday it must now pay for a complete redesign of the remote vision system used to operate the plane’s refueling boom, a project expected to take three-and-a-half years 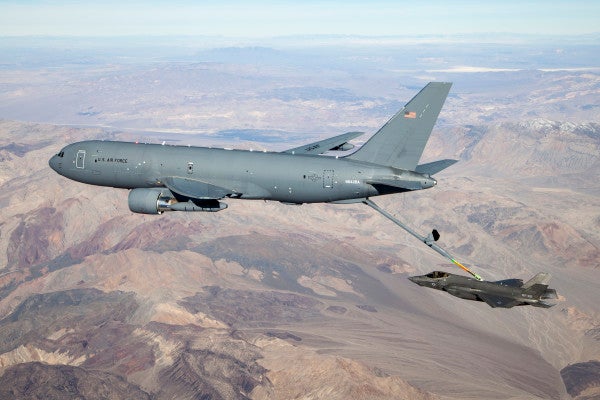 Having already written off $3.7 billion on the Air Force tanker program over the past six years, Boeing said Thursday it must now pay for a complete redesign of the remote vision system used to operate the plane’s refueling boom, a project expected to take three-and-a-half years.

In a separate good-news portion of its agreement with the Pentagon, the Air Force said it will release $882 million to Boeing that it withheld due to the multiple technical problems with the KC-46 tankers — $28 million on each of the 33 tankers delivered so far, or about 20% of the total due to Boeing.

This payment is not for the redesign, the Air Force said, but to provide Boeing liquidity during the cash crunch caused by the coronavirus crisis.

The fix Boeing must develop is for the camera and display system that allows an operator seated at a computer at the front of the tanker to maneuver the refueling boom at the tail of the plane so it can connect to a receiving aircraft. The current system does not work well in certain lighting conditions: when the sun is directly behind or directly in front of the tanker.

The Air Force has complained this makes the tanker incapable of fulfilling all its missions and has demanded a fix. Boeing and the Air Force said Thursday they have finally reached an agreement on how to do that.

In a press briefing, Boeing KC-46 vice president and program manager Jamie Burgess said his team will completely redesign every component: the cameras, the display system and the underlying computer system.

Burgess said Boeing has agreed to pay for everything and that the cost will hit earnings, though he declined to specify by how much.

The redesigned system won’t be ready until mid-2023, he said.

Boeing will convert the system from a monochromatic to a full-color display and add a new LIDAR ( Light Detecting And Ranging) sensor similar to those used for collision avoidance on autonomous cars that will measure the distance from the tip of the boom to the refueling aircraft.

Burgess said flight tests of the new system will begin in 2022. Following testing and certification, the system should be fielded in the Air Force fleet in the second half of 2023.

In the meantime, Boeing will develop, implement and pay for a nearer-term software enhancement of the current remote vision system that will make it more workable by mid-2021. Flight testing of this enhancement is to begin this summer, Burgess said.

He said the $882 million cash infusion from the Pentagon is “unrelated.”

In a teleconference with Pentagon reporters Thursday, Air Force Assistant Secretary for Acquisition Will Roper said the government is acting to help the aerospace industrial base through the crisis.

“Cash flow is everything right now, liquidity is everything, and we’ve created policies in the Department of the Air Force to get as much cash out of our hands and to industry as possible,” Roper said. “The KC-46 is no exception.”