The U.S. Air Force successfully shot down multiple missiles with a laser weapon that could eventually defend fighters and other aircraft against existing and emerging missile threats 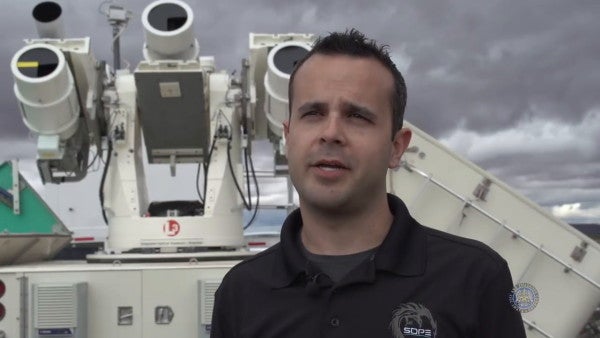 The U.S. Air Force successfully shot down multiple missiles with a laser weapon that could eventually defend fighters and other aircraft against existing and emerging missile threats.

The Air Force's Self-Protect High-Energy Laser Demonstrator (SHiELD) program is developing a new directed-energy weapon on a pod that could be used to protect U.S. aircraft from surface-to-air missiles and air-to-air missiles.

The final SHiELD weapon will be smaller, lighter, and more suited to use in a harsher airborne environment, according to the Air Force, and the recent test was a step in the right direction.

“The successful test is a big step ahead for directed energy systems and protection against adversarial threats,” Air Force Research Laboratory commander Maj. Gen. William Cooley said in a statement. “The ability to shoot down missiles with speed of light technology will enable air operation in denied environments.”

Dr. Kelly Hammett, the director of AFRL's Directed Energy Directorate, said that this capability has the potentially to be a “game changer for our warfighters.”

A Lockheed Martin test pilot recently told an audience that America's sixth-generation fighter could be armed with directed-energy weapons, according to USNI News. Lockheed is one of three defense contractors involved in the SHiELD program, according to Air Force Magazine.

The Air Force has previously suggested that this system could be used to protect not only advanced fighters but also bombers, tankers, and transport aircraft in high-risk environments, such as the difficult-to-penetrate anti-access zones that US great-power rivals are creating.

Unlike traditional countermeasures, this defensive could offer endless protection against a variety of threats, making it a potentially revolutionary concept. The Air Force is probably still a few years out from demonstrating a working prototype of the final SHiELD laser, The War Zone reports.

WATCH NEXT: The Pentagon Is Ending A Training Program For Afghan Pilots After Nearly Half Go Awol In The US