The Air Force Research Laboratory (AFRL), based at Wright-Patterson Air Force Base, has delivered what it says is the Air Force’s first high-energy laser weapon for battlefield use against drones 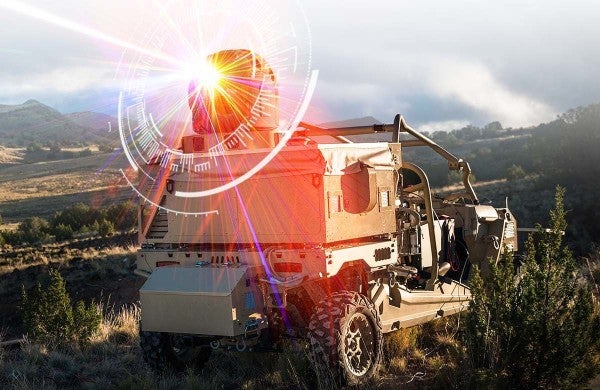 The Air Force Research Laboratory (AFRL), based at Wright-Patterson Air Force Base, has delivered what it says is the Air Force’s first high-energy laser weapon for battlefield use against drones.

AFRL has set up the laser weapon system overseas for a 12-month field assessment. The Air Force Strategic Development Planning & Experimentation (SDPE) Office located at Wright-Patt is leading the project, AFRL said in a statement Monday.

The new laser will be tested along with THOR — another AFRL innovation, offering an electronic technology can take down swarms of drones in rapid fire, the lab said.

The receiving combatant command will use the laser as an operational asset against small unmanned aircraft systems, Dr. Michael Jirjis, the SDPE Base defense experimentation director, said in the AFRL release.

During the year-long field assessment, the Air Force will evaluate five systems in all, AFRL said. Field assessments began in January 2018 when the Vice Chief of Staff of the Air Force, Gen. Stephen Wilson, asked the Air Force to experiment with directed energy systems as an effort to “transition game-changing capability to the warfighter,” AFRL said.

“THOR is a directed energy game-changer,” said Dr. Kelly Hammett, AFRL’s directed energy director. “Drones are becoming more and more pervasive and can be used as weapons intended to cause harm to our military bases at long standoff ranges. We built the THOR weapon system as a deterrent against these type threats. THOR with its counter electronic technology can take down swarms of drones in rapid fire. This capability will be an amazing asset to our warfighters and the nation’s defense.”

Leading up to the current field assessment, the Air Force SDPE Office successfully led operational experimentation events of laser and high power microwave testing events in the fall of 2018 at White Sands Missile Range in New Mexico and in the fall of 2019 at the Maneuver Fires Integrated Experiment event held at Ft. Sill, Oklahoma, AFRL said

According to Jirjis, the next 12 months will allow AFRL to “shape how the Air Force wants to move forward with both high energy lasers and high power microwaves against small drones.”

“The intent of these systems are to be operationally used by the combatant commanders for the duration of the 12 months,” he said.