An Air Force officer who engaged in an unprofessional relationship with an airman 20 years his junior while commanding a... 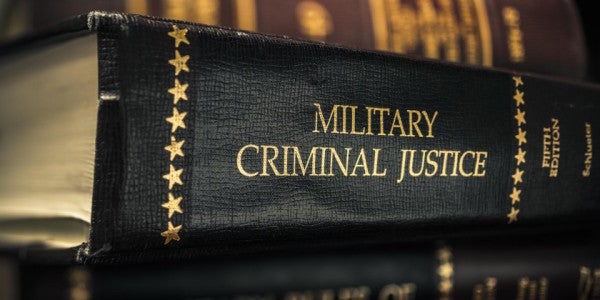 An Air Force officer who engaged in an unprofessional relationship with an airman 20 years his junior while commanding a small expeditionary base in Africa will be forced out of the service following a general court-martial last week.

A military judge ruled late Friday that Lt. Col. Denis Paquette should be dismissed from the service, the equivalent of a dishonorable discharge for enlisted personnel. The dismissal means that Paquette, a C-17 pilot and married father with more than 18 years in the Air Force, won’t be eligible for retirement benefits.

Paquette chose to have his case decided by a military judge. He pleaded guilty to fraternization; violating a lawful general order on one occasion by drinking more than two alcoholic drinks at a deployed location in less than 24 hours; and to impeding an investigation.

The judge, Col. Mark Milam, found Paquette was negligent in performing his assigned duties, a lesser offense than the dereliction of duty for which he was charged. The judge also found Paquette did not violate the same general order regarding alcohol consumption on numerous occasions. He was also found not guilty of the most egregious charge against him: abusive sexual contact.

The criminal charges against Paquette stemmed from his time last summer as commander of the 722nd Expeditionary Air Base Squadron at Sidi Ahmed Air Base in Tunisia.

While assigned to Altus Air Force Base, Okla., Paquette was tasked with standing up the squadron at what was then a secret location in Africa for unmanned aerial vehicle operations.

In his first time commanding a squadron, Paquette oversaw the Americans’ side of the camp, which was about the size of a football field and supported about 70 airmen and 20 contractors, according to court testimony.

Witnesses described Paquette as a personable commander who made it a point of getting to know all of his airmen, from their names to personal details about their families, goals and hobbies. But his gregarious leadership style backfired when his relationship with an 18-year-old Security Forces airman with less than a year in the service progressed from mentoring to a close friendship and sexual attraction, according to testimony.

“It starts out with a mentorship but it goes way, way, way over the line after that,” said Maj. Rachel Lyons, senior trial counsel for the Air Force, in court. “After that, he uses personal knowledge of her family to get closer to her … and to try to take the relationship to the next level.”

When others in the camp became uncomfortable with how much time the two were spending together, the two were advised to limit their personal contact, according to testimony. To continue communicating out of the public eye, the two began writing what prosecutors called “love letters” to each other, while also still spending time together, including at a party one night in July where both were said to be drinking.

Alcohol consumption at the base was one of the major themes of the trial, with prosecutors alleging that Paquette ran the base like a “summer camp” and a “frat house.” Paquette was charged with failing to follow and enforce a U.S. Africa Command general order that prohibited airmen from drinking more than two alcoholic beverages in a 24-hour period at their deployed location. Most of the government’s 15 witnesses, brought to Ramstein to testify from various locations worldwide, testified about the alcohol consumption on base, with one describing it as “overwhelming.” Airmen were allowed to keep alcohol in their tents and parties went late into the evening most Friday and Saturday nights, some airmen testified.

But airmen also testified that Paquette told them to be responsible and that he thought it important to keep morale high by not counting alcoholic drinks. They said the mission was accomplished.

Paquette was relieved of command on Aug. 2, 2016, about three months after he took charge of the squadron. During its investigation, the Air Force Office of Special Investigations found the letters Paquette and the airman exchanged, which led to the abusive sexual contact charge. Paquette wrote in one of his letters about a night when they had both been drinking and sitting next to each other: “I moved my hand to your leg to hold your inner thigh. Yikes!”

Prosecutors argued that the airman was too drunk that night to remember or to consent to the touching. But attorneys for Paquette said OSI took the case too far, since the airman said she didn’t feel like a victim.

“All along, this was always about a fraternization, about a relationship gone too far between an officer and enlisted and a violation of a general order, said defense attorney Jonathan Crisp, in an interview after the trial. “OSI took the letters and made more out of it.”

On his guilty pleas alone, Paquette faced up to a maximum nine years in prison. But the judge declined to punish him beyond the dismissal.

Milam, the judge, asked the airman during her testimony if she felt like a victim.

“Technically in writing I am a victim but I don’t feel victimized,” she said. The airman, however, said she was too drunk to recall if Paquette touched her inner thigh and that she would not have been OK with it.

“It would be wonderful if I could take a trip back in time and make different decisions, but I can’t,” Paquette said to the judge in an unsworn statement, apologizing to the judge, his family and his airmen for his mistakes.