"If I were to puke and make that color into an MDU that would be it." 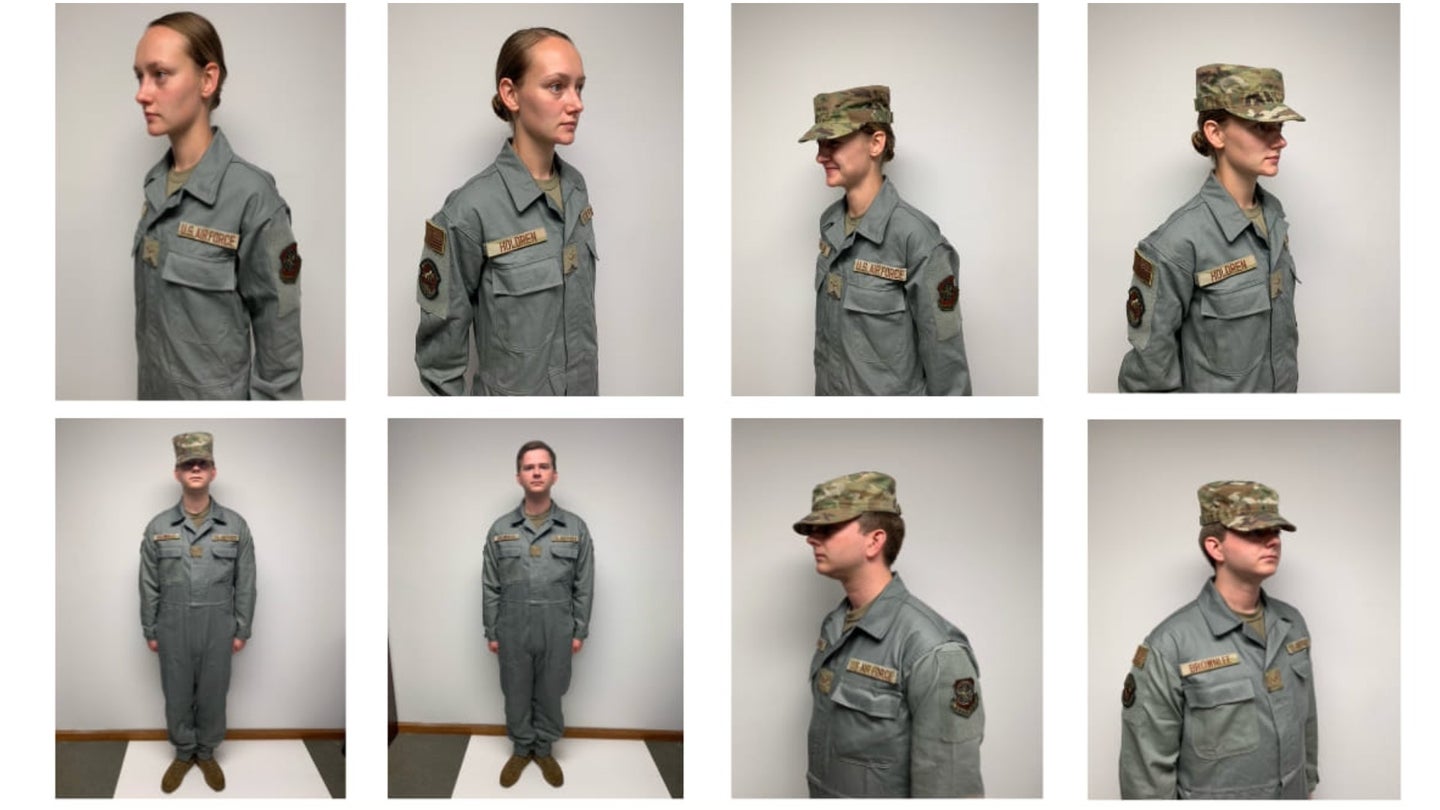 A leaked Air Force PowerPoint gave airmen a sneak peek of the coveralls that aircraft maintainers will be able to wear to and from the base. (Facebook / Air Force amn/nco/snco).
SHARE

A leaked Air Force PowerPoint slide gave airmen a sneak peek of the coveralls that aircraft maintainers will be able to wear to and from the base, on the flight line, and in other areas where previously they could not.

The slide comes seven months after the Air Force officially announced the policy change for coveralls in June 2021. Before then, maintainers and other airmen who worked in messy jobs (such as fuels, firefighting, munitions and engineering), would often have to drive onto base in their camouflage utility uniform, change into their coveralls when they arrived, then change back into camouflage on their way out. But soon, they can save time by wearing these standardized coveralls almost all over the place.

According to the slides, airmen authorized to wear the maintenance duty uniform can wear it when going to and from work, at all locations on base, while at off-base short convenience stops, or while eating at restaurants where people wear “comparable civilian attire.”

There are some limits: the MDU can’t be worn “for office work environments, non-industrial or non-labor tasking,” the powerpoint says. It also can’t be worn “in restaurants where most diners wear business attire or at establishments that operate primarily to serve alcohol.” That makes sense as the same rules go for the Air Force camouflage utility and flight suit uniforms.

The MDUs are one of several changes the Air Force is making to improve quality-of-life for airmen. Last year, the service broke with its sister services by announcing it would allow airmen to put their hands in their pockets while in uniform. Other changes included being able to use a cell phone or drink water while walking in uniform; new physical training uniforms; longer hair and hair accessory standards; cosmetic tattooing for men; and wearing morale patches on Fridays or during special events.

“We trust our airmen, noncommissioned officers and commanders with incredible resources and significant responsibilities and we’ll need to do so even more as we prepare for future conflicts,” said Air Force Lt. Gen. Brian Kelly, the deputy chief of staff for manpower, personnel and services, in a statement in August. “We likewise trust they can figure out what it takes and means to maintain standards without specifying exact behavior in every situation.”

One Air Force veteran said the MDU is a good step for aircraft maintainers.

The service “making it an official uniform for maintenance is great, because it will save time for folks if they’re allowed to wear them to and from work,” one former C-130 transport plane crew chief told Task & Purpose.

The hitch is, some folks have a problem with the color, which the PowerPoint described as “sage,” but which most onlookers described as grey or green.

“Well they look like if I were to puke and make that color into an MDU that would be it,” one F-15 fighter jet maintainer told Task & Purpose. Other observers held a similar opinion.

“Had to go with that janitor grey,” wrote one commenter reacting to the news on the popular Facebook page Air Force amn/nco/snco, where the slide was first shared.

It wasn’t that critics disagreed with the color just for aesthetic reasons. Since grey is a light color, maintainers said that stains would show up more easily on it, which means the MDUs would very quickly become “unserviceable,” meaning too dirty or worn out.

Still, he said, at least it’s not tan, which shows stains even easier.

“I can’t understand the logic in that color,” wrote a commenter on Facebook. “Not a single person on the board thought hydraulic fluid, fuel, grease, sealants, etc would show up on a light green uniform a lot worse than it would on a dark blue or black?”

As if to underscore the point, one slide comparing the grey/green MDU to the coveralls worn by other services made it clear that green or blue is the color preferred by the Navy, Marine Corps, Coast Guard, and even in the Air Force’s premier aerial demonstration team, the Thunderbirds.

The Air Force could not immediately answer questions about why grey-green was chosen for the MDU. It may not be the end of the world though: some maintainers don’t even wear coveralls.

“Most guys I know don’t wear coveralls, we would rather just wear Dickies pants and call it a day,” said the F-15 maintainer. “It’s user preference. There’s nothing wrong with coveralls, but if they took the puke color scheme out of play I feel like everyone in maintenance would appreciate it.”

“I prefer a two piece myself, but a jumpsuit isn’t a bad option either if we’re allowed to wear jackets and cold weather layers over the top, and able to roll the top half down in the summer,” said the C-130 crew chief.

No matter what, it’s better than getting your operational camouflage pattern uniform stained.

“The prevailing thing to me is that they’re a purely functional piece of clothing,” said a former F-16 fighter jet maintainer. “They serve the purpose of wearing so that you don’t ruin the ‘utility’ uniform (which hydraulic fluid will readily do.).”

The only time he and his fellow maintainers were “encouraged” to wear their utility uniforms was “if we were doing some kind of special VIP aircraft walkaround or had somebody special flying,” such as a colonel or other high-ranked officer.

Off the flight line though, it was usually utilities only.

“We were basically always told to go to-and-from work in either civilian clothes or the utility/airman battle uniform. Coveralls were very strictly ‘at work’ wear,” the F-16 maintainer said. “It may have been dog-and-pony show purposes and not a strict regulation, but that is what I always went with. Show up in uniform for roll call, change into coveralls, and then get to work.”

The old policy for coveralls contrasts with the policy for flight duty uniforms, the zipper-suited green or desert tan one-pieces worn by aviators. According to Air Force regulations, aviators could wear flight suits to the same places they could wear utility camouflage uniforms, but maintainers could not wear coveralls to those same places and would have to change into camouflage. Maybe the Air Force did not want dirty grease monkeys splattering hydraulic fluid everywhere, but for whatever reason the policy appears to be changing.

Grey or not, the MDUs will hopefully provide more options for the maintainers who wear them.

“If they’re comfortable enough, clean up to the point where they’re presentable/command doesn’t yell at you, and keep you from getting your daily uniform dirty, I don’t see an issue,” the F-16 maintainer said.