San Antonio police are still searching for a missing woman, but her husband has already been taken into custody and officials believe she was murdered 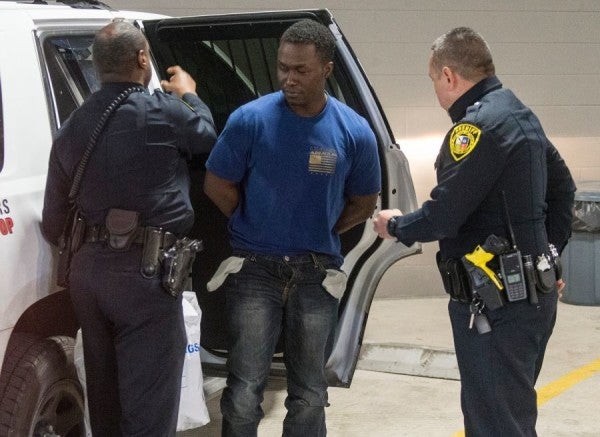 San Antonio police are still searching for a missing woman, but her husband has already been taken into custody and officials believe she was murdered.

Air Force Maj. Andre McDonald was arrested Sunday in connection with the disappearance of his wife, 29-year-old Andreen Nicole McDonald.

McDonald, 40, was detained Saturday for a mental evaluation by the Air Force after his wife went missing. But it wasn't until Saturday night that police obtained a second search warrant for the house.

“We found some things really quite disturbing,” Bexar County Sheriff Javier Salazar said. “The evidence consisted of a shovel, an ax, some heavy duty trash bags, some work gloves, and two 5-gallon containers of gasoline.”

Before she went missing, Andreen McDonald warned friends that her husband would be to blame for anything suspicious.

“The first witness said that the Missing Person (Andreen McDonald) told her many times if she ever went missing it would be because the Suspect killed her,” an affidavit acquired by the San Antonio Express News read.

After Andreen McDonald failed to show up to work on Friday, one of her employees and another woman showed up at her house, according to police. When no one answered, they entered through an unlocked back door and found blood and hair on a light switch in the master bathroom, as well as a fire on the ground with a zipper among the flames.

The women left the house and one went to pick up Andreen McDonald's mother and bring her back. The other intercepted Andre McDonald as he came home, but said they “weren't able to get many answers,” the San Antonio Express News reported.

That afternoon, they called police and said they suspected “foul play.”

When questioned, Andre McDonald told authorities that his wife was being treated at Baptist Emergency Hospital, but there were no records of her there.

A day later, McDonald bought a gun and ammunition from Nagel's Gun Shop, while police were still tracking him.

After following him home, a deputy noticed a previously unseen shovel inside McDonald's car.

A second search warrant turned up receipts for a shovel, an axe, a hatchet, heavy duty large plastic bags, gloves and two 5-gallon gas cans, along with heavy coveralls inside his Porsche according to the San Antonio Express News.

McDonald was charged with tampering with evidence, a third-degree felony, according to jail records. No bond amount was listed.

Salazar, the sheriff, said the couple's 6-year-old daughter, who is autistic, is being taken care of by a relative.

“To us, it's pretty evident she saw something,” he said. “She saw what happened to her mom, and that's the most heartbreaking part of this case.”

A spokeswoman for the Air Force told the Daily News that they are cooperating with local officials.

Lt. Col. Alysia Harvey told The News that they are looking out for “the health and safety and wellbeing of all of our airmen and their families.”