The Air Force was forced to terminate an unarmed Minuteman III intercontinental ballistic missile Tuesday morning in response to an... 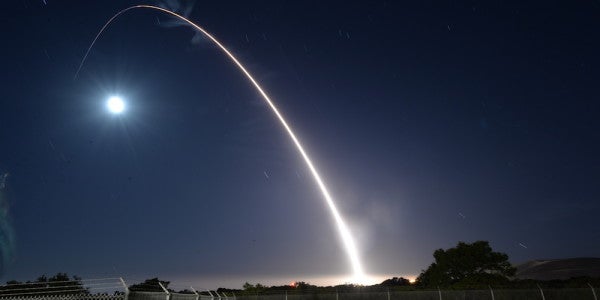 The Air Force was forced to terminate an unarmed Minuteman III intercontinental ballistic missile Tuesday morning in response to an unsafe “anomaly” that emerged during a test, according to Air Force Global Strike Command.

The 30th Space Wing at Vandenberg Air Force Base in California ordered the destruction of the $7 million ICBM early Tuesday, eliminating it over the Pacific Ocean. Global Strike Command refused to comment as the incident is under investigation.

Air Force Gen. John Hyten, head of U.S. Strategic Command, described the test as “perfect,” at least until “somewhere in flight, we saw an anomaly.”

“The anomaly was going to create an unsafe flight condition, so we destroyed the rocket before it reached its destination,” he said at the 2018 STRATCOM Symposium Wednesday, according to Military.com. “It was the smart thing to do.”

Tests occur regularly, but failures are much more infrequent. Hyten told his audience that the last failure happened in 2011, with the one before that occurring in 2009.

Explaining that this is a “rare thing that is in the missile business,” Hyten said that “now we have to go figure out what happened.”

One possibility, and potentially the most likely given the STRATCOM's chief's characterization of the incident as the emergence of an “unsafe flight condition,” is that the missile veered off course, forcing a Mission Flight Control Officer's hand. The motto among the MFCOs is reportedly “track 'em or crack 'em,” according to Popular Mechanics, which sent reporters to observe one of these tests firsthand.

In the initial phase of flight, the MFCO may have only a matter of seconds to make the critical decision to terminate a missile, making that individual the sole decision maker for the weapon's fate. In the later phases, the officer might act on the consent of his/her superiors.

If the officer detects that the missile will cross any predetermined safety lines, that individual will reportedly “send a function,” causing the missile to crack and spiral into the ocean.

While Tuesday's decision to destroy the ICBM was purportedly “smart,” not every executed self-destruct sequence is intentional.

Human error, specifically the pressing of the wrong button, caused a test of a U.S. missile defense system to end in failure last July. A tactical datalink controller on the destroyer USS John Paul Jones accidentally identified an incoming ballistic missile as a friendly system, resulting in the initiation of a self-destruct sequence for the SM-3 interceptor, Defense News reported at the time.

The initial report from the U.S. Missile Defense Agency said that the interceptor missed the target, revealing that the “planned intercept was not achieved.” During a later test in January, an SM-3 Block IIA interceptor fired from an Aegis Ashore missile defense facility in Hawaii also failed to achieve the desired intercept.

Hyten said that Tuesday's test failure is exactly why the U.S. tests its systems. “We have to make sure that things work. We learn more from failures than we do successes,” he said, adding that the unsuccessful test does not weaken America's offensive capabilities.

“I have a full complement of ICBMs on alert,” he explained.