An unarmed intercontinental ballistic missile was launched just after midnight Wednesday from Vandenberg Air Force Base as part of an... 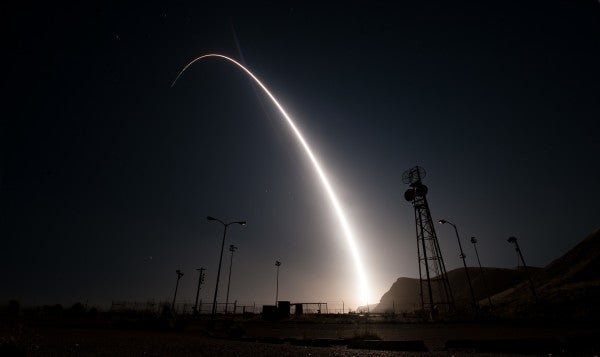 An unarmed intercontinental ballistic missile was launched just after midnight Wednesday from Vandenberg Air Force Base as part of an operational test to show the country’s nuclear deterrent capability, according to the U.S. Air Force.

The Minuteman III missile test launch occurred at 12:03 a.m. from the base northwest of Lompoc, Calif., according to Vandenberg’s 30th Space Wing. The launch command was delivered from the Airborne Launch Control System on a Navy E-6 Mercury jet, according to the Air Force Global Strike Command.

The missile, which was equipped with a nonexplosive payload that recorded flight data, traveled 4,200 miles to a test range in Kwajalein Atoll in the Marshall Islands, according to the Air Force.

According to the Air Force Global Strike Command, the launch was designed to “verify the accuracy and reliability” of the Minuteman missile system as well as provide “valuable data to ensure a continued safe, secure and effective nuclear deterrent.”

The missile has been in service for 60 years, but it has been upgraded over the years with improved targeting and enhanced accuracy systems, the Air Force said.

On Monday, the Nuclear Age Peace Foundation, a nonprofit, nonpartisan organization, criticized the timing of the launch, citing heightened tension between the U.S. and North Korea. In recent weeks, North Korea has stepped up its testing of ballistic missiles.

“When it comes to missile testing, the U.S. is operating with a clear double standard: It views its own tests as justified and useful, while it views the tests of North Korea as threatening and destabilizing,” foundation President David Krieger said in a statement. “What is needed is diplomacy rather than military provocations. Threats, whether in the form of tweets, nuclear-capable aircraft carrier groups, or nuclear-capable missile launches, only increase the dangers to us all.”