The U.S. military conducted an “extraordinary flight” over Ukraine Thursday to “reaffirm U.S. commitment to Ukraine and other partner nations”... 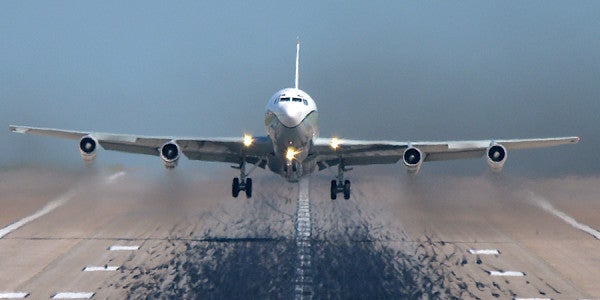 The U.S. military conducted an “extraordinary flight” over Ukraine Thursday to “reaffirm U.S. commitment to Ukraine and other partner nations” amid escalating tensions triggered by “provocative and threatening” Russian behavior, the Department of Defense said in a statement.

A U.S. Air Force OC-135B observation aircraft flew over Ukraine with U.S., Canadian, German, French, United Kingdom, Romanian and Ukrainian observers on board, the Pentagon told Business Insider in an emailed statement. The observation flight was requested under the Open Skies Treaty by the Arms Control Directorate of the Ukrainian General Staff.

“The timing of this flight is intended to reaffirm U.S. commitment to Ukraine and other partner nations,” the Department of Defense said. “Russia's unprovoked attack on Ukrainian naval vessels in the Black Sea near the Kerch Strait is a dangerous escalation in a pattern of increasingly provocative and threatening activity.”

The statement refers to the recent clash between Russian ships and Ukrainian naval vessels in the Sea of Azov. The Russian vessels rammed and fired upon three Ukrainian ships before capturing the ships and their crews.

The Open Skies Treaty allows signatory states to gather information about the military activities of other member countries. While normal Open Skies Treaty observation flights ought to be approved by all member states, including Russia, extraordinary flights can be conducted on a bilateral basis, CNN reported.

A total of 25 U.S. military personnel — eight Defense Threat Reduction Agency personnel and a 17-person aircrew from the 55th Wing out of Offut Air Force Base, Nebraska — participated in Thursday's flight.

The flight comes on the heels of an unusual U.S. Navy freedom-of-navigation operation in the vicinity of Peter the Great Bay. The guided-missile destroyer USS McCambell conducted the operation, the first in this area since the Cold War, Wednesday, challenging Russia near the headquarters of the Russian Navy's Pacific Fleet.

The U.S. is also making preparations to send a warship into the Black Sea, CNN reported Wednesday. “Our U.S. 6th Fleet is always prepared to respond where called,” Cmdr. Kyle Raines, a spokesman for 6th Fleet, told reporters.

“The United States seeks a better relationship with Russia, but this cannot happen while its unlawful and destabilizing actions continue in Ukraine and elsewhere,” the Pentagon said in a statement Thursday.

SEE ALSO: What You Should Know About The Simmering Conflict Between Russia And Ukraine