"I’m at my breaking point.” 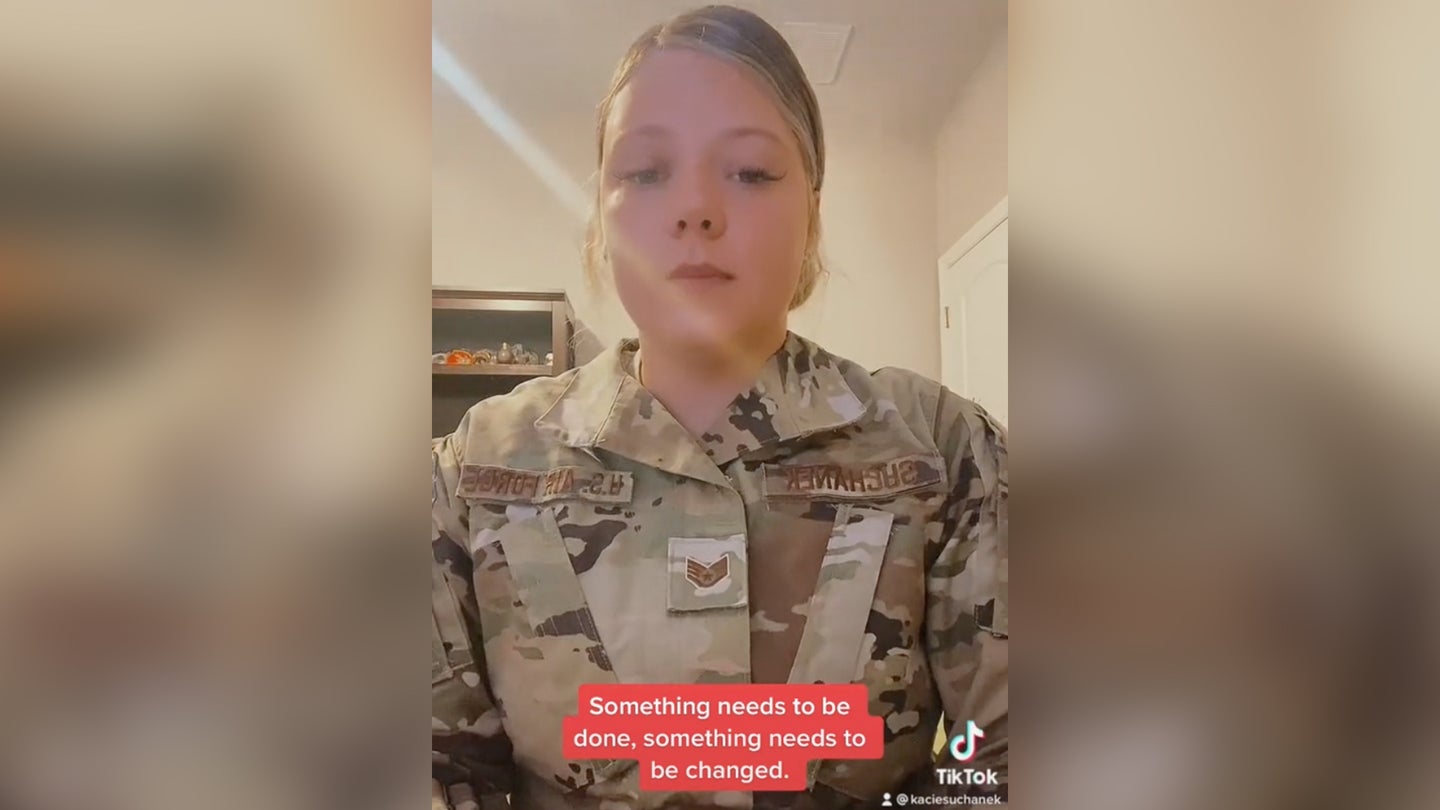 An airman in Florida made a TikTok video over the weekend in which she described her assault by another service member last year, and said that she is being failed by the civilian and military justice systems.

“My name is Staff Sgt. Kacie Suchanek, and today marks eight months since I’ve been raped,” the airman says in the video, looking directly at the camera as she sits in her uniform. “I’ve absolutely had it and I’m at my breaking point.”

Suchanek, an airman with the 125th Fighter Wing in the Florida Air National Guard, said she was raped by another service member on Oct. 11, 2021. Because of her and her attacker’s duty status, and because the assault happened off-base, Suchanek told Task & Purpose on Monday that it did not fall within the military’s jurisdiction to prosecute and was instead being handled by civilian authorities. She did say, however, that her request for an expedited transfer to another unit was recently rejected, though she isn’t sure by whom.

In her TikTok video, Suchanek says that civilian prosecutors declined to pursue serious charges because there “wasn’t enough evidence after I had provided a rape kit, photos of my ripped out hair, bruises, my clothing, three witness statements, and a controlled phone call of 35 minutes with my rapist, apologizing and crying repeatedly, and apologizing for the trauma that he’d caused me.”

“If there wasn’t a rape, what trauma would there have been?” Suchanek said.

More and more frequently, service members are taking to social media to get the word out about any number of things happening within their units. It’s a stunning development for a bureaucratic organization that emphasizes strict adherence to the chain of command and one where many unit leaders prefer to resolve issues “in-house” and behind closed doors. But for younger soldiers who are comfortable and familiar with social media, it can be a logical next step when they feel they’ve exhausted all other options.

Suchanek told Task & Purpose that she decided to go public with her story to “bring attention to the fact that not only is the state of Florida failing its people, but the Florida Air National Guard is failing its people as well.”

Will Manley, a spokesman for the Florida National Guard, confirmed to Task & Purpose on Tuesday that they are “aware of the reported sexual assault of one of our members.”

“The 125th Fighter Wing has provided continuous assistance, using all available resources, since being informed of the assault in October 2021,” Manely said. “We continue to work with the victim on all aspects of this case including finding a compatible transfer. In order to protect the victim, the suspect was moved to a geographically separated unit and given a ‘no contact order’ with the victim. We continue to monitor the progress of the suspect’s civilian case.”

On Oct. 11, 2021, Suchanek said she went to another airman’s apartment for a party. She didn’t know many people at the unit because she’d only arrived three weeks prior, she told Task & Purpose on Monday, and was excited at the opportunity to make more friends. When she arrived, she saw that it was her, the man who was throwing the party, and two other people.

Over the next hour and a half to two hours, Suchanek said the four were casually drinking and talking. And on multiple occasions, she said, the man whose apartment they were drinking in grabbed or inappropriately touched her, laughing. She barely knew him and she was confused about what he was doing and why he was doing it. In one instance she recalled just trying to “laugh it off,” feeling confused that he was trying to “be sexual with me” in front of the other man and woman in the apartment.

Suchanek was in shock as the two left the room, she said. But just minutes later she said the man grabbed her around the neck and “forced me back into the room.” He raped her again, Suchanek said — this time also hitting her with open hands and closed fists.

“I know my head hit the wall extremely hard,” she said. “I thought, somebody had to have heard that, somebody’s going to come in. But nobody came in.” In the living room where the two other party guests were, Suchanek said there was “very loud music” playing on the television. She said she thinks it was difficult for them to hear what was happening in the next room.

She recalled that he was saying “terrible things” to her throughout the assault, calling her degrading names and even suggesting he was going to get his phone to “record me as he was raping me.”

“He was saying, ‘Can I go get my phone?’ Like he already had permission to do what he was doing,” she said. After the second assault, Suchanek said she immediately left the apartment.

In the hours following her assault, Suchanek said she got a rape kit done at a civilian health clinic, answering question after question about what occurred that night while undergoing a physical exam and having photos taken of her bruises.

Nevertheless, she said in her TikTok video, civilian authorities determined it wasn’t enough evidence to prosecute. She told Task & Purpose that because of the duty status she and her attacker were on, and because it occurred off-base, it did not fall within the military’s jurisdiction.

Suchanek said she has since received both inpatient and outpatient treatment for depression and post-traumatic stress, which she said was incredibly helpful in facilitating her recovery. But she said the last straw came after she returned to her unit and found that her request for an expedited transfer to a different unit was rejected.

So, she decided to go public with what was happening. The ensuing video has been viewed tens of thousands of times, and commenters have posted thousands of replies in support; one woman after another has commented that her experience is why they didn’t report their assault when they were in uniform and that the military “fails us all” with sexual assault.

“I know that I’m not the only victim, and the military and criminal justice systems fail millions of others just like me every single day,” Suchanek says in her video. “I have fucking had it, and something needs to be done.”

If you or someone you know has been sexually assaulted, help is available at the National Sexual Assault Hotline: 800-656-HOPE (4673). U.S. service members and their families can reach the DoD Safe Helpline, operated by RAINN, online or at 877-995-5247.