The Air Force Has An Overkill Problem

The United States Air Force seems to have finally recognized that it will have to operate in permissive airspace fighting... 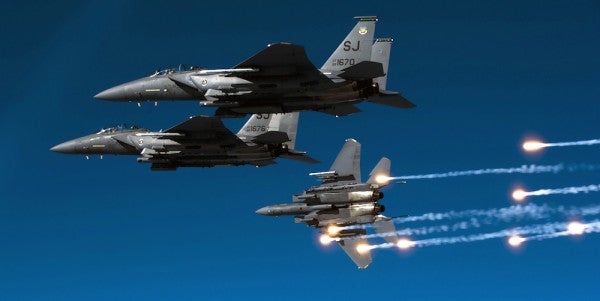 The United States Air Force seems to have finally recognized that it will have to operate in permissive airspace fighting against poorly armed insurgents for the foreseeable future.

In perhaps a breakthrough of sorts for the service, the Air Force also seems to recognize that high performance fourth and fifth-generation fighters such as the Boeing F-15E Strike Eagle and Lockheed Martin F-35 Joint Strike Fighter are not the best weapons—being massive overkill—to use against such groups.

Instead, the Air Force seems serious about pursuing options that would give it a low-cost platform that could perform that mission in a much more cost effective manner while reserving its higher-end capabilities to counter rival great power threats.

“The Air Force is also investigating a new light attack aircraft (OA-X) that may provide opportunities to create a ‘high/low’ mix for combatting low-end threats in more permissive environments,” Lt. Gen. Arnold Bunch, military deputy to the Office of the Assistant Secretary of the Air Force for Acquisition, and Lt. Gen. Jerry Harris, Air Force, deputy chief of staff for plans, programs and requirements, wrote for their written testimony before House Armed Services Committee on June 7.

“We have invited industry to participate in a demonstration this summer to determine if a business case exists to add a light attack aircraft to our arsenal. A commercial off- the-shelf OA-X could be used to complement, not replace, our current aircraft inventory. This approach could provide more cockpits to absorb and season a greater quantity of fighter pilots and provide 4th and 5th generation aircraft the required training time to prepare for high-end threats and the operational tempo relief to extend their service life.”

As part of the its search for an low-cost OA-X platform, the Air Force will be conducting a live-fly experiment this summer with several aircraft including the Embraer A-29 Super Tucano, Beechcraft AT-6 and the Textron Scorpion light attack jet.

“The Air Force is experimenting with potential off-the-shelf aircraft as part of a broader assessment into industry’s capability, capacity, and interest to provide cost-effective innovative solutions with low procurement, operating and sustainment costs,” Bunch and Harris wrote.

“Since the deployment demand is not expected to decrease, the Air Force must meet capability demands in permissive environments while building and maintaining readiness to meet emerging threats in more contested environments. Aligning capability, capacity and cost with wartime demands is key to meeting Air Force commitments to combatant commanders and effectively using taxpayer resources.”

The Air Force is currently working out the details of how it will conduct its experiment this summer, but if the evaluation shows that an OA-X might be useful, the service might buy such an aircraft. Such a purchase would not be used to replace any existing jets—the Air Force plans on retaining six squadrons of the much more capable Fairchild Republic A-10 Warthog—but rather would be a complementary new capability that would potentially be used to expand the force.

“We are currently in the process of reaching agreement on Other Transaction Agreements with these companies to outline the details of their participation,” Bunch and Harris wrote.

“This live-fly experiment will assess the capabilities of these off-the-shelf light attack aircraft, which will be flown by Air Force personnel in scenarios designed to highlight aspects of various combat missions, such as close air support, armed reconnaissance, combat search & rescue and strike control and reconnaissance. The experiment will also include the employment of weapons commonly used by other fighter/attack aircraft to demonstrate the capabilities of light attack aircraft for traditional counterland missions. Results from this experimentation campaign will be used to inform future capability development and investment decisions.”

If the Air Force can muster the political will to stay the course and purchase a good number of OA-X aircraft to take-on the low-end fight, it would be able to take some of the burden off an increasingly worn out fourth-generation fighter fleet. Those jets and their crews are sorely in need of relief after decades of unending combat.

“Our 4th and 5th generation fighter units need relief from current tasking against low-end adversaries in order to train for emerging threats,” Bunch and Harris wrote.

“We prioritized this initiative by creating a directorate on the Air Staff dedicated solely to this monumental effort.”