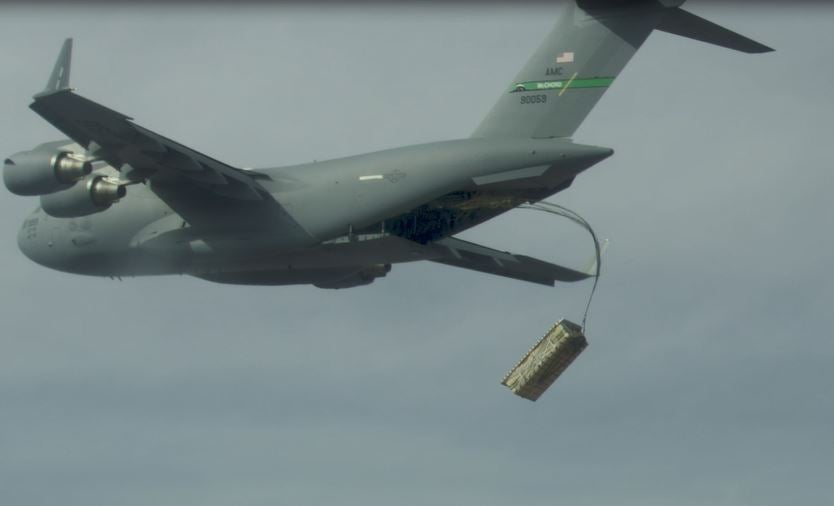 The U.S. Air Force has awarded Lockheed Martin Corp. $25 million to transform large cargo aircraft like C-17 Globemaster III into bomb trucks, and expects to hold a demonstration of the capability sometime next year.

Through the Palletized Munitions Experimentation Campaign, Lockheed will demonstrate deploying a case of Joint Air-to-Surface Standoff Missile Extended Range (JASSM-ER) munitions. Those flight tests are scheduled for 2021, according to a release from the company.

“The U.S. Air Force Research Laboratory contracting and Strategic Development Planning and Experimentation offices, and Lockheed Martin teams established this new contract in a record time of 30 days, supporting faster prototyping and a shorter timeline to bring this advanced capability to the warfighter in the field,” Callaway said. AFRL awarded the contract in August.

The goal of the latest phase of the experiment is to configure the aircraft as a bomb truck without extensive modifications on C-17s and C-130 Hercules variants, and to be able to execute the conversion quickly enough to support airmen overseeing the mission, Lockheed said. The aircraft would complement traditional fighters and bombers with enhanced long-range standoff weapons to engage multiple targets in a potential conflict.

The process would be automated, to a degree. The algorithm-configured system that controls the missiles prioritizes its targets based on a target’s availability and location, an Air Force official explained to Military.com this month. But crews on board would determine when and where those bombs would drop, and could update targeting information in real time.

Last month, Gen. Jacqueline Van Ovost, the head of Air Mobility Command, said that the command had recently airdropped simulated palletized Joint Direct Attack Munition bombs, or JDAMs, from a C-17 transport aircraft to test out whether airlifters can reliably deliver large volumes of air-launched weapons. The test was part of the service’s Advanced Battle Management System (ABMS) experiment, designed to leverage air and space platforms to collect, process and share data from around the world.

In later phases, there will be an “actual launch of an actual missile that actually gets fired,” Van Ovost said during the Air Force Association’s 2020 virtual Air, Space and Cyber conference.

The AMC experiment was similar to Air Force Special Operations Command’s Cargo Launch Expendable Air Vehicles with Extended Range, or CLEAVER, test earlier this year, except the CLEAVER’s pallet drop came off an MC-130J Commando II, which is already configured to airdrop weapons.

“The concept, once fully matured, is for these munitions to behave just as if they were dropped from a bomber aircraft — separate from the aircraft, ignite their motors, fly to predesignated waypoints and altitudes, then strike their targets,” Van Ovost said. The AMC experiment is not meant to replace any global strike bomber roles, she added.

Lockheed conducted tests simulating JASSM-ER drops on both the MC-130 and C-17 this year, the release said.

The JASSM-ER, a newer variant of the JASSM, has a higher survivability rate, meaning it’s less likely to be detected and shot down due to low-observable technology incorporated into the conventional air-to-ground precision-guided missile. It is said to have a range of roughly 600 miles, compared with the 230-mile reach of JASSM, according to The Drive, and can already be launched from both fighter and bomber aircraft.

Callaway told multiple media outlets this week that the company and the Air Force are still determining the right number of bombs it should use for the pallet, accounting for factors such as weight, drag and lift required for loadmasters stowing the munitions on board the back of the aircraft.

“It’s partially a function of the deployment airdrop system, the missile being loaded onto the system and the range that the aircraft is flying,” he said, according to a report from Defense News. “Obviously as smaller munitions come online, we expect that loadout to increase without the need to design a new palletized munition system.”