For the fifth consecutive year, the Air Force has failed to completely close its pilot manning gap through retaining, and recruiting and training new pilots, recently released data shows 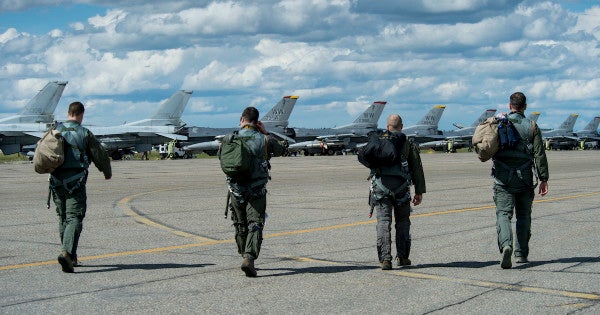 For the fifth consecutive year, the Air Force has failed to completely close its pilot manning gap through retaining, and recruiting and training new pilots, recently released data shows.

The U.S. Air Force will fall short in its year-end production goal of reaching 1,480 pilots by the end of fiscal 2020, and missed its pilot production benchmark in fiscal 2019, too, according to statistics provided by the service.

The service will not achieve its 1,480-pilot target, first set in the fiscal 2020 budget request published last March. Officials anticipate the service will have roughly 1,300 pilots across all communities by year's end, which show steady improvement, spokeswoman Ann Stefanek said in a recent email.

The service could not provide a breakdown of types of pilot communities — such as mobility and fighter — still experiencing manning gaps.

Then-Air Force Secretary Heather Wilson said before a Senate Armed Services subcommittee on readiness and management support in October 2018 that the service would increase its 1,160 pilot training slots to 1,311 in fiscal 2019. The Air Force ended up producing 1,279 pilots that year, roughly 30 pilots short of its increased goal, the statistics show.

“The Air Force is developing several initiatives to help us meet and sustain these higher production levels,” Stefanek said. “The planned growth in production, in conjunction with a continued focus on retaining our current pilots, is critical to restoring health. While we've arrested the decline, we still have several years of focused production and retention efforts to completely stop the pilot shortage.”

One of those efforts has been investment in aviation bonuses. In 2017, the service introduced a tiered bonus system to combat the chronic pilot shortage, with monetary incentives of up to $455,000 over 13 years for fighter pilots.

The following year, the Air Force launched a first-of-its-kind study: Pilot Training Next. The initiative, which emphasizes training in a virtual environment, assessed not only students' learning methods and ability to retain information, but also ways the Air Force can adapt and use futuristic technologies such as virtual reality and simulator training in its day-to-day training routine.

The service recently began its third PTN class at Joint Base San Antonio-Randolph, Texas; the latest class commences amid Air Force plans to make PTN an official program of record.

According to the fiscal 2021 budget request, the Air Force wants to dedicate $27 million across its Research, Development, Test and Evaluation, or RDT&E, and Operations and Maintenance budgets.

Some experts have said the 1,500-pilot goal may be out of reach, especially in the near term.

“We have a drastically different environment now where the body pool doesn't exit,” said Gene Colabatistto, formerly the group president for defense and security at CAE, a company that provides worldwide training and integration for the civil and military aviation. Colabatistto spoke to Military.com last year on various pilot incentives.

“We're not going to fix this if we buy better airplanes, or have better simulators or train better instructors,” he said at the time, arguing the many issues plaguing the service have nothing to do with what type of planes pilots are flying nor the technologies being used.

“It's a system issue,” he said. “You have to attract people, and they want to become pilots in general. Otherwise … you'll never succeed.”