Editor’s Note: This article by Oriana Pawlyk originally appeared on Military.com, the premier source of information for the military and veteran community. The Air... 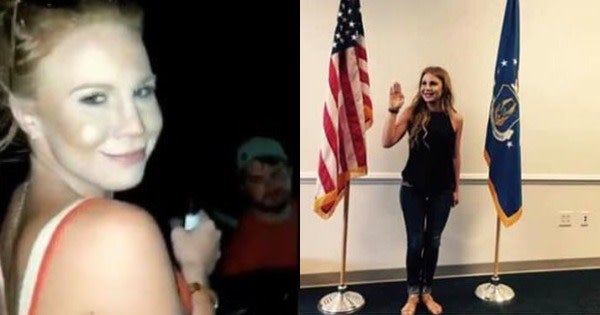 The Air Force Reserve is kicking out a brand-new recruit after a video surfaced earlier this week of her allegedly displaying racist behavior.

“The person noted in a recent inappropriate video is in the process of being released from her enlistment in the Air Force,” officials said on the Reserve's official Facebook page Friday. “The video, released days after her enlistment, is intolerable and does not reflect the values of the Air Force.”

Officials would not publicly name the recruit, but she has been identified as 20-year-old Tabitha Duncan of Missouri via social media and other media outlets.

On Sunday, a video surfaced showing Duncan and friends saying they were going ” hunting,” using an unprintable slur used to describe African-Americans.

“So we going hunting today or what?” someone says in the video. Duncan later responds, “You get them .”

The video quickly went viral and got the attention of Reserve officials.

“We are using command channels to address the issue,” officials said on Facebook. “The Air Force culture embraces diversity and fiercely safeguards character, respect, and leadership. We expect our Airmen to adhere to our core values at all times and to treat their fellow Airmen and citizens with the highest degree of dignity and respect.”

Duncan this week told The New York Daily News she was sorry and that she had been drinking underage. She clarified she had not been with friends, but with people she “barely knew.”

“I was underage drinking, and I said something stupid,” she told the newspaper.

The Social Bar & Grill in St. Louis where Duncan worked has also terminated her employment over the “vile, disgusting and offensive video,” officials told the Daily News in a statement.

Duncan said she needs to seek help for her lapse in judgment.

“I was intoxicated,” she said. “I have black friends, I have black people in my family. I didn't mean it. I didn't know that I was being .”