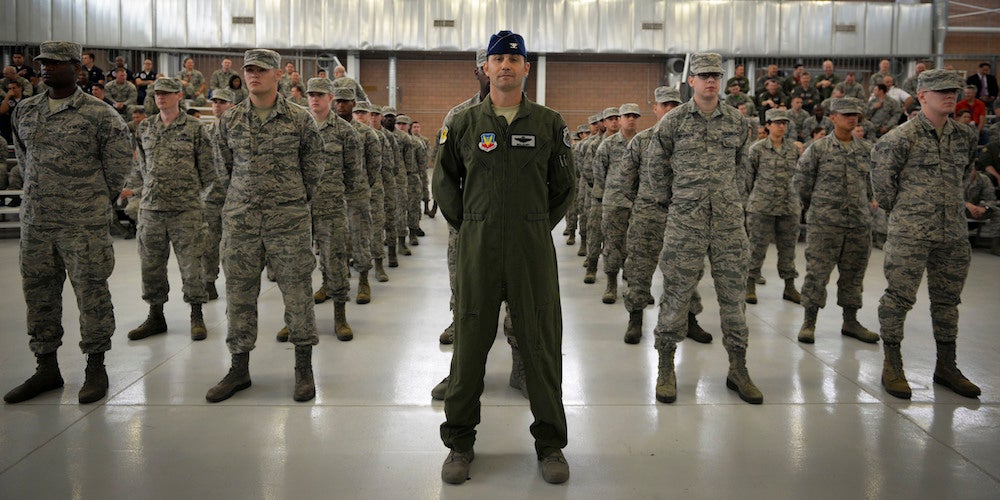 Citing the highest service member retention rates in two decades, a top Air Force general says the service may need some troops to transfer into other specialties, or into the Guard or Reserve.

Lt. Gen. Brian Kelly, the deputy chief of staff for manpower, personnel and services, said Tuesday that the service asked Congress to authorize 900 more active-duty airmen, for a total end strength of roughly 333,700. But the service finished out the 2020 fiscal year “already over the 333,700” benchmark, he said.

“Our retention levels right now are probably the highest we’ve seen in 20 years, going all the way back to shortly after 9/11,” Kelly told reporters during a phone call. The service estimates it now has roughly 334,600 active-duty airmen.

Officials are taking steps to address which airmen may be well positioned to move out of “overmanned” career fields, or into the Air Force reserve based on how far along they are in their careers, the general said.

“We want to have some ability to be able to allow folks to transition, and [afford them]… other opportunities … where we need them to be,” Kelly said. “Some of that might be earlier transitions to the Guard or Reserve; that helps us control our numbers a little bit. Some of those might be … [moving airmen] to an undermanned career field to help us shape and go forward.”

The process, he emphasized, would be voluntary and may require waivers.

“[There is] no anticipation and no outlook that we would use any involuntary [separation] measures” to downsize the force in 2021, he said.

The Air Force is also analyzing which incentive bonuses — traditionally offered to airmen who are employed in undermanned specialties and apportioned based on years of service — it will keep offering and which it will postpone for another year, Kelly added.

“We probably don’t need as many offerings for the bonuses and opportunities for those retention incentives as we’ve had in the past,” he said. Kelly did not offer specifics into which bonus programs could be affected, citing ongoing discussions.

The Air Force has been working to augment recruiting and retention efforts in light of the COVID-19 pandemic, which caused record unemployment spikes in the civilian job market.

Officials previously said the service was expected to have trouble hitting its end-strength target as recruiting efforts largely went remote.

Kelly said it’s likely the downturn in the economy contributed to the Air Force’s gains, but also credited the service’s efforts to build back the force over the last five years following the congressionally mandated spending caps known as sequestration.

In 2019, Kelly said, the Air Force was finally able to end a longstanding shortage in aircraft maintainers through collaboration across major commands and units. In 2016, officials first acknowledged a maintainer shortfall of roughly 4,000 people.

The Air Force currently is short about 2,000 pilots; in February, officials said the service would also fall short of its goal of producing 1,480 new pilots across the force by the end of fiscal 2020.

Regarding pilots, Kelly said the service is “happily manned” and almost overmanned in field-grade officers, or O-4s to O-6s, but undermanned in the ranks of second lieutenant through captain.

That “has a lot to do with our ability to actually produce and deliver more pilots,” he said.

New estimates will be available soon regarding the impact of the pandemic on the Air Force pilot population, as major airlines slowly return to normal operations amid new COVID-19 safety protocols.

The key to stabilizing force size moving forward is to assess recruitment and retention goals regularly, Kelly said. He added that while the Air Force has made “small adjustments” or reductions in accessions for high-demand jobs, leaders are still trying to avoid deep recruiting cutbacks that may result in shortfalls down the line.

“We’ve actually been down this road … and you sometimes find, a couple years from now, you don’t have the right inventory and mix to actually meet the requirements you’re going to have,” he said.

“We want to have an overall comprehensive strategy that allows us to manage the size and shape of the force accordingly, and not just use reductions in accessions,” he said. “We’re trying to balance that out.”