Air Force Master Sgt. John E. Grimesey of Carthage will receive the Silver Star, the third highest medal presented by the Department of Defense, for his actions during a 2013 mission in Afghanistan 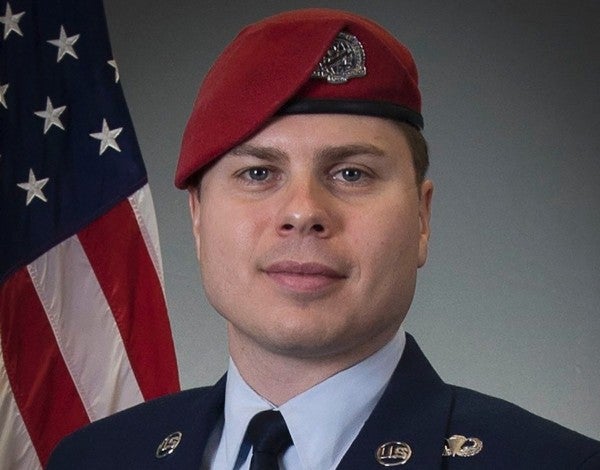 Air Force Master Sgt. John E. Grimesey of Carthage, North Carolina will receive the Silver Star, the third highest medal presented by the Department of Defense, for his actions during a 2013 mission in Afghanistan.

Grimesey will also be awarded a second Bronze Star Medal with Oak Leaf cluster for his actions in a 2017 action in Afghanistan.

The medals will be presented Friday during a ceremony at Pope Army Airfield on Fort Bragg. Grimesey, who enlisted in 2008, serves as flight chief of the 21st Special Tactics Squadron at Pope Army Field, according to an Air Force news release.

On May 25, 2013, as a senior airman, Grimsey was involved in a clearing mission with the 21st Expeditionary Special Tactics, Combined Joint Special Operations Air Component-Afghanistan. He was partnered with a special forces team.

Early on, Afghan partners were cut off from American forces and were engaged by Taliban fighters, the release said.

The team split up in an effort to outmaneuver the Taliban forces and Grimesey and his intelligence sergeant were in the center of the village when an Afghani partner approached and said that some of his unit, including his commander, “were trapped in a Taliban-controlled compound.”

Grimesey and a small combined team headed toward the compound. Grimesey and his team positioned themselves next to the entrance of the walled compound, looked in the court yard and saw that the Afghan commander was dead.

“Moments later, an enemy fighter peered over the wall and opened fire from 5 meters away, bullets impacting the wall next to Airman Grimesey’s head and between his legs,” the release said.

“Airman Grimesey leaned back and killed the insurgent with his personal weapon, saving multiple lives.”

Moments later a rocket-propelled grenade exploded on the other side of the wall, knocking Grimesey down and destroying one of his radios, according to the release.

Despite a head injury, Grimesey located an injured special forces soldier, grabbed the back of his kit and dragged him 25 feet, away from enemy fire.

“From cover, (Grimesey) engaged enemy positions with his personal weapon and controlled multiple F-16 and AC-130 airstrikes,” the release said.

Grimesey then assisted in a mission to recover the body of the Afghan-partner commander, engaging and killing one insurgent. During the removal of the body, Grimesey “identified and engaged eight enemy personnel maneuvering on friendly positions.

“In total, he and his team killed 31 enemy fighters, recovered the body of the highly regarded Afghan Commander, and saved multiple Afghan and American military lives,” the release said.

Additionally, the Bronze Star is being awarded to Grimesey for “heroism as a combat control craftsman” during an attack July 20-21, 2017, in Nangarhar Province, Afghanistan.

At the time, Grimesey was technical sergeant and was serving as a joint terminal attack controller for a combined special operations assault force. The 107-member team, which included Afghan soldiers, were on a valley clearance operation, the release said.

A half-hour after leaving the observation post, enemy forces began firing on Grimesey and his team with machine guns, sniper and small arms fire, according to the release.

Grimesey coordinated a heavy artillery response, allowing the clearance operation to continue. Upon reaching a tree line, the enemy sprang an ambush, the release said.

Grimesey responded by having air support eliminate multiple enemy positions. He then sprinted up a ridgeline occupied by “friendlies,” where he could see over the treeline, and began identifying and eliminating “pockets of enemy resistance,” the release said.

“Identified by enemy snipers and with rounds impacting within inches, he contacted the southern controller to assist with suppression fires, allowing him to maneuver out of enemy fire.”

Despite heavy clouds in the valley, Grimesey “expertly produced his own target coordinates, dropping a 500-pound bomb within 90 meters of his position” as he worked medical requests for injured soldiers, the release said.

Grimesey, who is also the recipient of a Purple Heart, was promoted to master sergeant in July 2019.