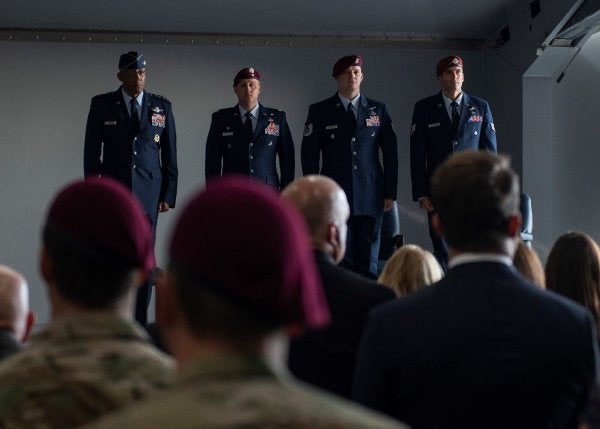 Two Air Force pararescue Airmen were awarded the Silver Star Medal on Friday for saving dozens of lives during separate Afghan battles in 2018 and 2019.

On Aug. 11-12, 2018, Fisher saved the lives of 10 critically injured soldiers and medically-evacuated 20 others during a fight in Ghazni Province, Afghanistan, according to an Air Force public affairs release. While serving as a rear gunner in the first vehicle of a military convoy, the Taliban ambushed with rocket-propelled grenades and machine gun fire.

“Sergeant Fisher, without hesitation or regard for his own personal safety, dismounted his armored vehicle and began to assess and treat four wounded soldiers while at the same time engaging two enemy fighters within 50 meters (about 165 feet) of his position,” the citation read, according to The Las Vegas Review-Journal.

Fisher himself was struck by grenade shrapnel, but continued to fire back at Taliban fighters, and later stopped massive bleeding and administered blood transfusions to two soldiers, stabilizing them until help arrived. During a second ambush, Fisher treated five additional partner force casualties.

According to the AF release:

The Taliban continued to strike Task Force, eventually striking the Mission Support Site and wounding 12 partner force soldiers. Fisher, without hesitation or regard for his safety, maneuvered through 75 meters of heavy machine gun and small arms fire to treat five of the wounded comrades.

Jumping back into the rear gunner seat of his armored vehicle, wounded Fisher manned the heavy machine gun as his team continued clearance operations of the city. Suddenly, a rocket-propelled grenade struck the vehicle, severely wounding Fisher; however, he refused to falter while on guard.

Swenson, meanwhile, received the award for saving the lives of nine American and partner force special operators on Sept. 13-14, 2019, according to the Air Force. During a helicopter assault, Swenson and his special forces team were ambushed by Taliban fighters from less than 100 meters away.

The team was pinned down by heavy machine gun fire and RPGs, according to the Review Journal. One grenade hit a wall behind Swenson, injuring him and five teammates.

Swenson fired back at the enemy, and then ran through intense fire to rescue a fallen soldier, treating his wounds before moving him to safety. Swenson then grouped other casualties and prepared them for medical evacuation. Then, during a second Taliban ambush, Swenson remained exposed to enemy fire as he continued to treat the wounded. Additionally, he went back with his teammates to rescue four more casualties who needed medical attention before being seen for his own wounds.

“It's weird to receive so much attention for something that I feel anyone else would've done on the battlefield that night,” Swensen said, according to the release. “I'm honored my peers think I deserve this medal.”