As military activity in the Arctic increases, the U.S. Air Force expects to play major role, and its special operators are already adapting to the region's challenging conditions 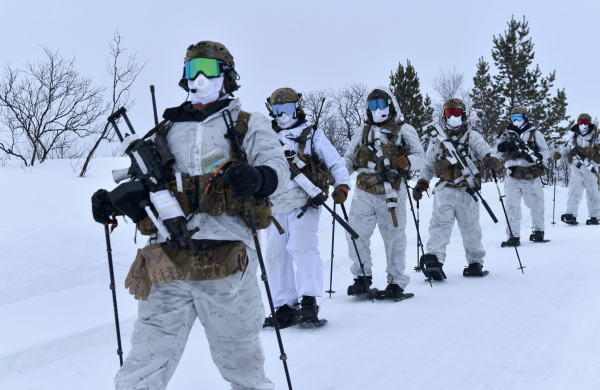 As military activity in the Arctic increases, the U.S. Air Force expects to play major role, and its special operators are already adapting to the region's challenging conditions.

Air Force Special Operations Command is “several years into improving our operations in the high north,” Lt. Gen. James Slife, head of the command, said at a press conference this week during the Air Force Association's annual conference.

U.S.-based operators are training in Alaska, and special operations airmen stationed in Europe are spending more time in the high north. “We have been actually putting a fair bit of time and effort into this,” Slife said.

During an exercise in Alaska in January, Special Tactics airmen practiced setting up a forward area refueling point — a fuel station for aircraft behind enemy lines — for F-22s in extreme cold weather, the first such exercise with fifth-generation fighters.

This month, members of the UK-based 352nd Special Operations Wing went to Norway for training. While they've worked closely with Norway for years, “this is the first time we have everyone together here at this base … and this type of tight integration,” the head of air operations for Norwegian Special Operations Command said in a release.

Slife said his command has been working to lighten its footprint to conduct expeditionary operations in the Arctic.

“What we've found is that we got to change some of our aircraft maintenance practices to ensure that we're able to reliably generate air power in that extremely harsh environment,” Slife added. “We've invested in protective clothing for both aircrew and maintainers and ground support personnel.”

The work has yielded “some pretty exciting innovation,” Slife said.

“We've got some young sergeants that are faced with tactical problems when they're operating in snow that is well up the side of the aircraft when they land their V-22,” Slife added. “They need to get the snowmobile out, so they developed some innovative inserts into the cabin of the aircraft that allow us to just drive the snowmobiles straight on and off the back.”

The high latitudes also pose unique challenges for communications, affecting both aircraft and warships. Slife said his command has invested in “technologies that will help us reliably communicate” in that part of the world.

“There are oftentimes challenges with being able to communicate beyond line of sight in that environment, and so we just have to go back and relearn some lessons … or explor[e] new waveforms and new frequency bands that allow us to communicate at long distance at those high latitudes,” Slife said, adding that there has been “some good progress.”

The head of U.S. Northern Command, which oversees military operations in North America, and of North American Aerospace Defense Command, or NORAD, is usually an Air Force general, reflecting the centrality of aerospace defense in the region.

The Air Force underscored its shifting focus this summer by releasing its first Arctic Strategy ever, declaring that the “Arctic's increasing strategic importance, coupled with the services' significant regional investment, requires the Department to have a unified, deliberate, and forward-looking approach.”

Beyond its strategic value, Alaska provides unique training opportunities. Eielson Air Force Base is home to Arctic Survival School, called “Cool School,” which for 60 years has trained airmen to survive long enough to be rescued.

Arctic-specific skills will only grow in importance as military, commercial, and civilian activity in the region increases.

“Training is key to being able to operate in the Arctic. We need both our personnel and our material to be ready,” Air Force Secretary Barbara Barrett said at a July event announcing the strategy.

“We work to train our people and to harden our resources … so that [they] can stand that harsh environment. We have to work to pass on that training and education, and we have to build things in hardened ways so that we can operate there,” added Barrett, who previously served as U.S. ambassador to Finland.

“We're excited to see the Air Force's interest in operating in the high north, because it's very complimentary to the stuff that we've been working on, and we look forward to doing more in the future,” Slife added.