The first enlisted woman to attempt the Air Force's special operations weather career field — now known as special reconnaissance (SR) — has not been selected to proceed further in her training, according to Air Education and Training Command. 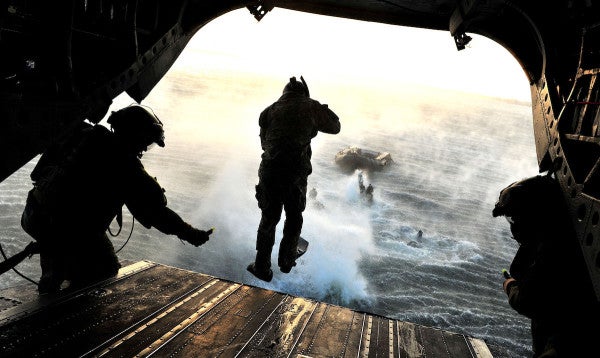 The first enlisted woman to attempt the Air Force's special operations weather career field — now known as special reconnaissance (SR) — has not been selected to proceed further in her training, according to Air Education and Training Command.

The trainee, unidentified for privacy reasons, was the eighth woman to try any kind of battlefield training in the Air Force since the Defense Department opened combat career fields to all in December 2015.

But the SR candidate “was not selected to proceed further in training during assessment and selection,” according to AETC spokeswoman Marilyn Holliday.

The Air Force rebranded its special operations weather team (SOWT) career field as “special reconnaissance” on April 30 in an effort to expand the specialty's skillsets, the service said in a news release.

Of the 10 female candidates who have attempted to join the Air Force's special warfare program, seven have pursued TACP training, one tried pararescue training, and one recently dropped from the SR program. The tenth, who is attempting to become a combat controller, graduated the special warfare prep class this week, Holliday said, adding that the command does not have an assessment and selection date for her.

One of the other candidates, who began AETC's special warfare prep course March 18 in an effort to become a Tactical Air Control Party (TACP) airman, graduated the course, according to the spokeswoman. The airman is waiting to begin the TACP prep course, but does “not have a start date yet,” Holliday said in an email to Military.com on Wednesday.

The command does not track recruits who are interested in the special warfare career fields until “they've officially entered the technical training portion,” AETC has said.

“Being a Special Warfare airman is tough, and the missions they are asked to execute are high risk,” she said. “The stress of these career fields is hard on all members, regardless of gender. Not everyone wants to be a Special Warfare airman, but those who have the desire and qualifications are afforded an opportunity to serve in those specialties.”

Holliday said it can take up to two years for special warfare candidates to join an operational unit. “The training pipeline for these highly skilled and highly trained specialties quite lengthy for all Special Warfare airmen and can last up to 24 months,” she explained.

In February, Lt. Gen. Brian Kelly, the Air Force's deputy chief of staff for manpower, personnel and services, in written testimony before the Senate Armed Services subcommittee on personnel, said attrition in these career field pipelines has been high because of the grueling training.

Attrition across the elite training pipelines ranges between 40 and 90 percent, depending on specialty, he added.

“Consequently, we do not foresee large numbers of females in operational units in the near term,” Kelly said at the time.