A female Air Force officer has completed a rigorous special warfare course and will move on to the next program within the Special Tactics Officer training pipeline, making her the first woman to advance this far within battlefield officer specialty training 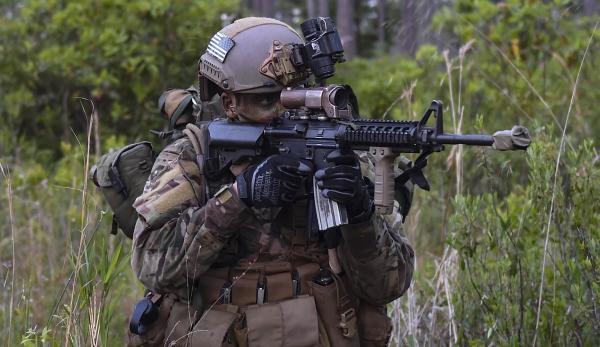 A female Air Force officer has completed a rigorous special warfare course and will move on to the next program within the Special Tactics Officer training pipeline, making her the first woman to advance this far within battlefield officer specialty training.

The Special Tactics Officer (STO) candidate, who is unidentified for privacy reasons, was recently selected to start the next iteration of the training pipeline following her successful completion of the “STO Phase 2 Assessment” conducted by Air Force Special Operations Command (AFSOC), according to 1st Lt. Jeremy Huggins, a spokesman for the Special Warfare Training Wing.

“She has successfully completed the Special Tactics/Guardian Angel Assessment and Selection Course, the first course for STOs within the Special Warfare Training Wing, and she is now awaiting the Pre-Dive Course,” Huggins said in an email to Military.com on Monday. “As such, she has proceeded farther in the pipeline than any female pursuing Pararescue, Combat Control, Special Reconnaissance, Special Tactics Officer or Combat Rescue Officer specialties.”

The officer candidate's pre-dive course should begin within the next few weeks, but safety precautions due to novel coronavirus, also known as COVID-19, could change the timeline, Huggins said.

“At this time, the women in the training pipeline have not been delayed in starting courses due to the spread of COVID-19. However, this is a rapidly developing situation and may change in the days ahead,” he said. “The Special Warfare Training Wing's goal is to keep candidates and staff safe while minimizing the impact of COVID-19 to the training mission.”

On the enlisted side, two women attempting to enter the Air Force's combat controller (CCT) and pararescue (PJ) battlefield airman career fields have advanced into their next stage of training.

Huggins said that two women who began the PJ and CCT pipelines last fall have completed the Special Warfare Preparatory Course and are eligible for the next Assessment and Selection (A&S) course.

Additionally, a new enlisted female candidate “is currently in the Special Warfare Preparatory Course,” he said. The prep class runs eight weeks. Once she graduates, she will proceed to the A&S course.

Huggins said women have advanced to the A&S level in previous attempts.

One PJ candidate and a Special Operations Weather Technician (SOWT) candidate — now known as Special Reconnaissance (SR) — entered the A&S course, but neither successfully completed the program, he said.

Some have self-eliminated or sustained injuries; others have not met the standards of a particular program.

Last year, Lt. Gen. Brian Kelly, the Air Force's deputy chief of staff for manpower, personnel and services, said the service was hopeful of prospective candidates who continue to break barriers, but added that attrition in these career field pipelines has been high because of the grueling training.

Attrition across the elite training pipelines ranges between 40 and 90 percent, depending on specialty, Kelly told the Senate Armed Services subcommittee on personnel on Feb. 27, 2019.

“Consequently, we do not foresee large numbers of females in operational units in the near term,” he said at the time.