The Air Force typically doesn't get a lot of credit for close-range ground combat missions, but there is one unit that has fought alongside Army Rangers almost every day since the terrorist attacks of Sept. 11, 2001 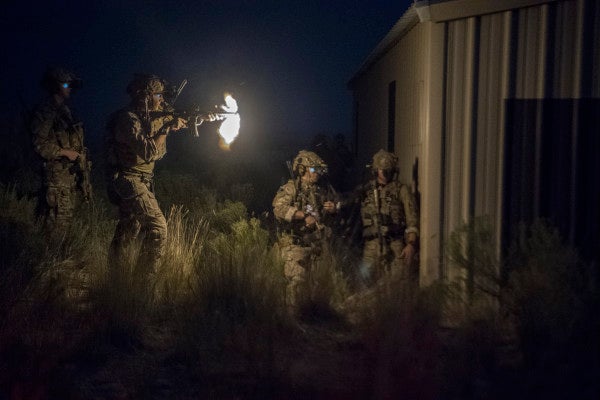 The Air Force typically doesn't get a lot of credit for close-range ground combat missions, but there is one unit that has fought alongside Army Rangers almost every day since the terrorist attacks of Sept. 11, 2001.

Since its initial deployment in October 2001, elements of the 17th Special Tactics Squadron have deployed with units of the 75th Ranger Regiment for more than 6,900 days and counting. The headquarters and two operational detachments of the 17th have been in a continuous rotation of combat deployments in the 19 years since 9/11, according to an Air Force news release.

“We fight, bleed and laugh beside [the Rangers]. We win as a team or fail as a team,” Air Force Staff Sgt. Ryan Duhon, a tactical air control party (TACP) airman who's responsible for directing close-air support with precision strike munitions on enemy targets when the elite Army raid force maneuvers on attack objectives, said in the news release.

“When we are downrange, there is no deviation or segregation between the Air Force and Army. We are one team fighting daily together to overcome adversaries,” he added.

The special tactics community has been the most highly decorated community in the Air Force since the end of the Vietnam War, according to the release, which added that the 17th's 80 high valor medals make up a large portion of the community's combat honors.

One such award was the April 2019 presentation of the Silver Star and Bronze Star with Valor to Tech. Sgt. Cam Kelsch, a TACP operator, for his actions during a 2018 enemy ambush.

Kelsch was attached to a 75th Ranger element when it got caught in an ambush during an April 25, 2018, night raid in Afghanistan. Kelsch exposed himself to enemy fire to call in danger-close air support from an AC-130 gunship overhead.

He was also wounded during the ambush as he dragged a wounded teammate to safety. He continued to call in AC-130 105mm cannon strikes on a heavy machine gun position just 70 meters away, while giving first aid to his wounded teammate and a wounded Afghanistan coalition service member, according to the award citation.

Kelsch also received the Bronze Star with “V” device for actions on another mission during the same deployment, when he stepped between the enemy and his ground force commander, who was injured during an ambush.

“The foundation of this unit is the heritage of warriors that distinguished themselves in combat before we walked these halls,” said Senior Master Sgt. Steve Reedy, the 17th STS operations superintendent. “Every member of this organization earns their right to be a member every day in keeping with that heritage.”

When not deployed, members of the 17th spend months training to make sure they are prepared to operate alongside elite Ranger formations.

“The training that we provide simply adds different layers and different [tactics, techniques and procedures], seeing that the Ranger Regiment conducts operations in a very specific way,” 1st Lt. Evan Patoray, 17th STS, Detachment 2 flight commander, said in the release. “As a team, we push each other beyond what we have all seen in combat. We do this because we understand that if this training does not save their own life, it will allow them to save the lives of the Rangers around them.”