“I’ve been on hundreds of flights and never had a hitchhiker quite like that." 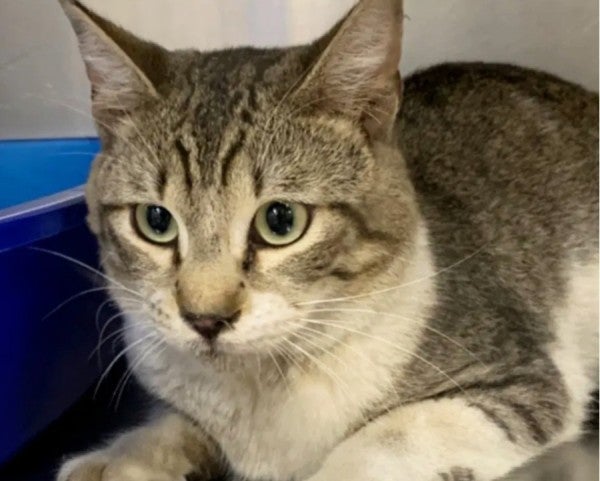 After several weeks of fostering the cat that stowed away on a military cargo plane and landed in Bangor last month, Nanci Hamlin said she is not at all surprised the feline — now named Cargo — wound up on board a flight that ended across the country.

“Knowing Cargo the way we do now, we can see why he was on that plane,” Hamlin said. “He has no fear and loves to get on top of or inside everything.”

Hamlin and her fiance Justin Proulx both work at Bangor International Airport and had been following the cat’s story ever since he was discovered hiding under a cargo pallet in the belly of the Boeing C-17 Globemaster III cargo plane on July 1.

The flight originated in California the previous day and made one stop-over in Colorado to load cargo before landing in Bangor.

Last month, United States Air Force Capt. Daniel Cotton, the pilot of that cargo plane who is currently on a four-month deployment overseas, said he and his crew discovered the cat on their plane after spotting a pile of poop in the plane and discovering a muffin left on the flight deck had been half eaten.

This was right before the crew was taking off for Europe and, at the time, Cotton said he was glad they found the cat when they did, saving it from an even longer trip.

As it was, Cotton said the cat had to be pretty nimble and brave to make its way out of the cargo hold and all the way up to the flight deck in total darkness when the plane was on the ground in Bangor overnight.

“I’ve been on hundreds of flights all over the world and landed in pretty much every continent and never had a hitchhiker quite like that,” Cotton said.

Related: We talked to the unsung hero behind all those Military Giant Cat memes

Finding a stowaway cat was a first for the airport, too. The staff there turned the cat over to the Bangor Humane Society. Staff from the airport and the human society in Bangor contacted officials at Air Force bases and animal shelters California and Colorado. They also posted to social media accounts. After three weeks with no success, the humane society placed Cargo up for adoption. That’s when Hamlin and Proulx offered to give Cargo a home.

“He is a real spitfire and we call him a Tasmanian Devil,” Hamlin said. “He usually really gets going around two in the morning.”

His favorite toy is a stuffed bison the couple had found several years ago while cleaning and servicing a parked aircraft at the Bangor airport.

“We are thrilled for Cargo to go home, and not at all surprised to hear about his personality — he’s a character,” said Kathryn Ravenscraft, Bangor Humane Society director of development. “He would have to be to have taken himself on such an epic adventure.”

Hamlin and Proulx already had four cats and an Alaskan husky named Akiko. It was a bit of a rocky start, but Cargo is now fitting in quite well with his new family.

Cargo took over the house the minute he arrived, Hamlin said, which was not met with good grace by the four cats already living there.

To help ease the introductions, Hamlin and Proulx turned their bedroom into a safe space for Cargo where he has his food, litter box, bed and toys. They installed a screened door leading to the bedroom. This way Cargo and the other cats could see and smell each other, but not physically touch.

“We really did not know how our husky would be with him, or he with her,” Hamilin said. “We brought Cargo home and those two are inseparable and the best of friends.”

Cargo and Akiko spend their days chasing each other, playing with toys, bickering and cuddling up together for naps, Hamlin said.

These days Cargo is allowed out during the day when the humans are home to explore the rest of the house. He can interact with the other cats under supervision but he still sleeps in their bedroom. Hamlin said it’s going well — everyone is getting along and slowly getting used to the new member of the family.

Hamlin said Cargo loves to cuddle — especially with Proulx — and is very friendly and loving. And that his origins remain a mystery.

“We think he was a stray,” Hamlin said. “When we first brought him home we put him on our bed and he was like, ‘what’s this?’ and he jumped right off.’”

Cotton’s theory was Cargo’s home was the pallot under which he was found on board the plane.

“He was probably sleeping curled up in the pallet and all of a sudden there was all this light and noise and he was going up, up and up,” Cotton said. “We joked it must have felt like an alien abduction.”

Related: A Delaware soldier needed to raise $3,000 to bring a friendly cat home from Afghanistan. In two days, he raised $8,000

Hamlin has been in contact with Cotton and offered to foster the cat until the pilot returns to this country in November.

“We told him we will keep Cargo for him if he wants to adopt him when he gets back,” Hamlin said. “Right now he’s not sure if he can and we told him that if he can’t Justin and I will keep him and make Cargo part of our family.”

Back in July, Cotton had said his primary hope was finding and reuniting the cat with its family, if it had one. Barring that, he said he wanted the cat to be adopted by an exceptional family in the Bangor area. Finally, if no one wanted the cat, he said he’d be happy to give it a home.

Hamlin is not one hundred percent certain Cargo has lost his love of travel, saying he spends a great deal of time gazing out the windows.

“I feel he wants to know what is out there,” she said. “But he’s an indoor cat now.”