U.S. military bases across the globe may soon have a New Mexico-made, high-powered microwave weapon at their disposal to instantaneously down swarms of enemy drones 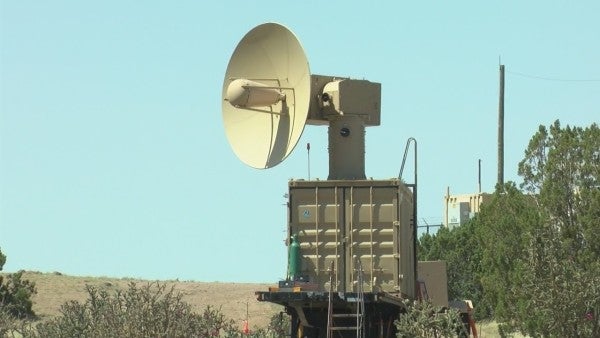 U.S. military bases across the globe may soon have a New Mexico-made, high-powered microwave weapon at their disposal to instantaneously down swarms of enemy drones.

The Air Force Research Laboratory at Kirtland Air Force Base unveiled the weapon Thursday morning in a live demonstration with local reporters, who watched the system effortlessly knock a hovering drone out of the sky with an invisible and inaudible electromagnetic wave.

The $15 million system, called the Tactical High Power Microwave Operational Responder, or THOR, disabled the unmanned aerial vehicle in a flash, sending it spiraling to the ground the moment the electromagnetic ray hit it. Had more drones been flying within THOR's expansive scope, they also would have dropped in an instant, THOR program manager Amber Anderson said.

“It operates like a flashlight,” Anderson said after the demonstration. “It spreads out when the operator hits the button, and anything within that cone will be taken down. It engages in the blink of an eye.”

The AFRL built the machine on an expedited, 18-month timeline to get it into war fighters' hands as fast as possible, given the increasing military threat from drones, said Kelly Hammett, head of AFRL's Directed Energy Directorate in Albuquerque. The system is aimed at protecting military bases from multiple-drone attacks, which the Air Force has identified as its No. 1 priority for emerging “directed energy,” or microwave and laser, defense systems.

That's because conventional defenses offer limited protection against swarms of incoming drones. Sharpshooters or military jets, for example, can't take out 50 drones at once, but THOR can.

“It's built to negate swarms of drones,” Anderson said. “We want to drop many of them at one time without a single leaker getting through.”

AFRL spent $15 million to develop THOR, which could cost about $10 million to produce if the U.S. Department of Defense chooses to deploy it, Hammett said. It was built in cooperation with three companies, including global engineering firms BAE Systems and Leidos and the Albuquerque firm Verus Research. The project created 20 full-time jobs in Albuquerque outside the AFRL, Hammett said.

If THOR is adopted by the Defense Department, it could mean a lot more local jobs, because the system is likely to be manufactured here, at least partly.

“If the Air Force or Army decide to procure it, that would be big for Albuquerque,” Hammett said. “It would establish a manufacturing and production base right here, representing hundreds of millions of dollars, if not more.”

The AFRL has been developing mircowave and laser defense technology for years, including collaboration with Raytheon, which built its own anti-drone microwave system in recent years that it successfully tested against swarms of UAVs at Fort Sill, Okla., in December 2017, and at White Sands Missile Range in southern New Mexico last fall.

Those tests, however, showed some limitations when integrating Raytheon's system with other military technologies and battlefield tactics and protocols, Hammett said. Raytheon has since invested more resources to further develop its system, which could still be deployed in the future by the military.

It's designed for rapid deployment wherever needed, with the microwave antennae and foundation stored in a shipping container transported on a flatbed truck. The equipment is stored in parts for easy, snap-together assembly in just three hours.

“It takes two people to set it up and three to tear it down.” Anderson said. “You can take it to the field, rapidly set it up and it's ready to fire. It's designed as a turnkey system.”

A handheld remote control rotates the antennas in all directions as needed, providing 360-degree defense against drones. The firing mechanism and overall system control are operated from a laptop.