Bye-bye to BRRRT: the Air Force wants to retire 44 A-10 Warthogs

Despite multiple efforts to push the iconic A-10 Warthog's retirement date further into the future, the U.S. Air Force is now slated to shelve dozens of the Cold War-era ground-attack planes in the upcoming fiscal year, according to the service's budget request 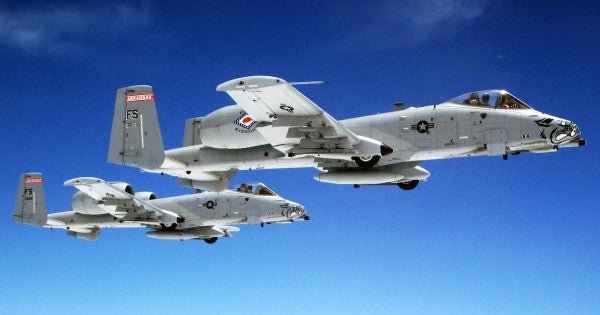 Despite multiple efforts to push the iconic A-10 Warthog's retirement date further into the future, the U.S. Air Force is now slated to shelve dozens of the Cold War-era ground-attack planes in the upcoming fiscal year, according to the service's budget request.

Their removal comes as the Air Force recently awarded a contract worth nearly $1 billion to Boeing Co. to produce new wings for the aircraft in need of the upgrade.

The service — facing financial pressure driven by congressionally mandated spending caps known as sequestration — made multiple attempts in recent years to fully retire the aircraft, which officials say would save an estimated $4 billion over five years and free up maintainers for the F-35 Joint Strike Fighter.

Known for its iconic Gatling gun designed to shred tanks, and its tough titanium armor designed to take hits and keep flying, the A-10 has proponents including prominent lawmakers who have fiercely opposed the move to get rid of the aircraft.

In 2016, then-Defense Secretary Ash Carter announced the A-10 retirement would be delayed until 2022 after lawmakers such as then-Rep. Martha McSally, a Republican from Arizona, and the late Sen. John McCain, also of Arizona, complained that doing so would rid the military of a “valuable and effective” close-air-support aircraft.

However, fiscal 2017 budget request documents show the Air Force had still planned to remove A-10 squadrons in increments between 2018 and 2022 to make room for F-35A Lightning II squadrons coming online. As a result, McSally included a provision in that bill that would prohibit retirement of the Warthog until the Air Force could prove that the F-35 is able to perform similar missions as effectively on the battlefield.

To date, the Air Force has 281 A-10s in its inventory (two A-10s were destroyed in a collision in 2017), but has repeatedly stressed it can maintain roughly six of its nine A-10 combat squadrons through 2032, which is why officials have not committed to buying new wings for the entire fleet.

The Air Force finished re-winging 173 A-10s in 2019 through the Enhanced Wing Assembly program, which began in 2011. One of the destroyed aircraft had received the upgrade.

Through the next iteration of the effort, the “A-10-Thunderbolt II Advanced-Wing Continuation Kit,” or “ATTACK” program, the service will begin re-winging the rest “of the A-10s that remain in the inventory” after 44 planes are cut, a spokeswoman said Monday.

The reduction means only 65 aircraft would need the wing fix, down from 109.

The planes, which entered service in 1976 and have deployed to the Middle East, Europe and the Pacific, have played an outsized role in the air campaign that began in 2014 against the Islamic State of Iraq and Syria, or ISIS, helping provide close-air support for Iraqi and U.S. partner forces on the ground. The A-10 has also been instrumental in air operations in Afghanistan.