"This shows that we are serious — this aid must reach the people of Venezuela, no matter what Maduro says," said Jose Manuel Olivares, a Venezuelan lawmaker allied with Guaido. 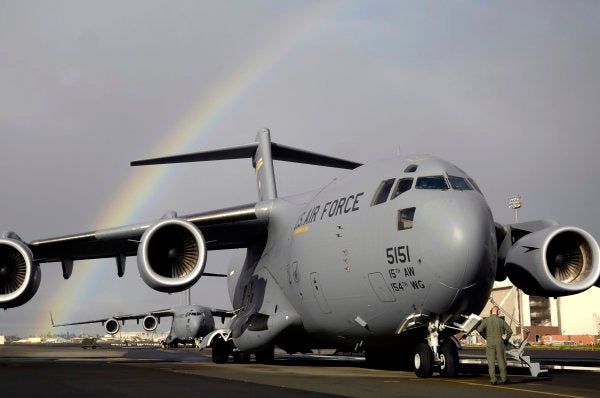 In Germany, Vice President Mike Pence urged the European Union to follow the U.S. lead in rejecting the legitimacy of Maduro's government and recognize the asserted interim government of Juan Guaido, the opposition legislator who declared himself interim president last month, with U.S. backing.

Meeting a U.S. Air-Force C-17 cargo plane at the airport here at a highly publicized event on Saturday was a welcome committee of representatives of the United States and Colombia, a close Washington ally, as well as officials with Guaido's self-declared “interim” administration.

“This shows that we are serious — this aid must reach the people of Venezuela, no matter what Maduro says,” said Jose Manuel Olivares, a Venezuelan lawmaker allied with Guaido.

The aid standoff has become a major test of Guaido's asserted leadership and of Maduro's resolve to resist growing international pressure to let in the food and medicine.

Maduro, who accuses Washington of mounting a coup against his socialist government, has labeled the aid a political tool and prelude to a U.S. “invasion,” and vowed it would never be allowed into Venezuela — which has been suffering chronic shortages of food and medicine.

The use of military aircraft to deliver food and medicines is standard and does not imply any prospective U.S. military intervention in Venezuela, according to the U.S. Agency for International Development, which is coordinating the aid program.

But the optics of a pair of huge cargo jets bearing the Stars and Stripes insignia touching down a few miles from the Venezuela border their arrival touted at a tarmac press event organized by the U.S. embassy in Bogota inevitably generated questions.

The Trump administration has said it seeks a nonviolent resolution to the Venezuelan crisis, but has not ruled out any options and insists that Maduro must relinquish power.

In a recent published interview, Guaido also pointedly did not rule out the possibility of military intervention in Venezuela. While he also said he prefers a peaceful outcome, Guaido told a Uruguayan publication that justification exists in Venezuelan law for an “international force” to “restore the constitutional order and protect the live(s) of our citizens.

“Francisco Santos, the Colombian ambassador to Washington who attended the airport news event here, was peppered with questions Saturday about a prospective U.S. military intervention, possibly from Colombian territory. He denied that the matter had even been officially discussed.

“We have not spoken of military intervention,” replied Santos, who added that the U.S. military aircraft “were the easiest way to bring in the aid.”

A previous shipment of Venezuela-bound aid was flown via commercial aircraft to Bogota and shipped by truck to Cucuta. Saturday's consignment ferried by the U.S. Air Force was the second major U.S. shipment of aid bound for Venezuela. More aid flights are scheduled in coming days, U.S. officials said.

“We've seen what happens when the free world and freedom-loving people unite around a single cause,” Pence said at the annual Munich Security Conference.

While many European nations have recognized Guaido as Venezuela's interim leader, neither the European Union as a whole or the United Nations have taken that step.Globally, Russia, China and Cuba remain allies of Maduro's government. Officials of Mexico, Uruguay and Italy, among other nations, say they remain neutral in the dispute and have not recognized Guaido's rule.Donated aid destined for Venezuela has been arriving to this border city for weeks, only to be stored in warehouses.

Venezuelan authorities have barricaded a bridge border crossing where the food and medicine were supposed to be shipped in.

U.S. officials have been urging Venezuelan military and police to allow the food and medicines to enter Venezuela. But the Venezuelan military brass has shown no public sign of breaking with Maduro, despite offers of amnesty from Guaido and from U.S. leaders.

In comments at the airport here, Mark Green, who heads the U.S. Agency for International Development, which provided the aid, called Maduro a “dictator” and blamed his “political mismanagement and corruption” for Venezuela's collapsing economy and its shortages of foodstuffs and medicines.

Maduro blames U.S. sanctions against Venezuela — what he calls a U.S. “economic war” or “blockade” — for the country's shortages.

Maduro was elected last year to a new six-year term in balloting boycotted by much of the opposition.

SEE ALSO: It Looks Like The Real Star Of 'Captain Marvel' Is The Air Force