The retired triple-amputee Air Force senior airman behind a GoFundMe campaign to help the federal government build a wall at the U.S.-Mexico border is forming a nonprofit organization to privately fund and build some portion of a border wall 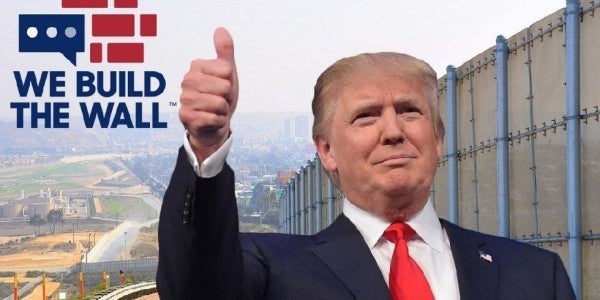 MIRAMAR BEACH — The retired triple-amputee Air Force senior airman behind a GoFundMe campaign to help the federal government build a wall at the U.S.-Mexico border has changed the campaign's focus, forming a nonprofit organization to privately fund and build some portion of a border wall.

Brian Kolfage lost both legs and his right arm during a 2004 rocket attack in Iraq, where he was serving with Air Force security forces. Two years ago, he and his family moved into a Miramar Beach home provided to them through the Gary Sinise Foundation and the Veterans United Foundation.

Kolfage set up his online wall-funding campaign just before Christmas. His plan then was to raise $1 billion to help the government build a border wall. President Donald Trump is seeking nearly $6 billion in tax dollars for wall construction, a request at the center of an ongoing impasse with Congress that has shut down part of the federal government.

As of Monday, Kolfage's campaign had raised more than $20 million. But since Jan. 11, funds have gone to We Build the Wall, the name given to the refocused effort to privately pursue wall construction.

“We're not trying to build the whole southern border wall,” Kolfage said in a Monday interview. Rather, he explained, the hope is that once construction begins — which could be in a matter of months — the government will also begin building portions of the wall. And, Kolfage added, a further hope of We Build the Wall is that once people see construction starting, they will be motivated to contribute to the private wall-building effort.

Donors who contributed to the GoFundMe campaign prior to Jan. 11 must “opt-in” to the new effort or their donations will be refunded within 90 days, according to the reconfigured GoFundMe page.

Kolfage said that currently, an estimated $11 million has been transferred to the new wall effort. That estimate, Kolfage explained, is based on We Build the Wall's email contacts with donors. In all, Kolfage said, he expects that 90 percent or more of the money donated prior to Jan. 11 will be transferred into the new wall construction effort.

Kolfage shifted strategy after consulting with people he called “some of our country's leading professionals in law, politics, national security, construction and finance.” Their conclusions, Kolfage explains on GoFundMe, are that the “federal government won't be able to accept our donations anytime soon,” and that the public is “better equipped than our own government to use the donated funds to build an actual wall on the southern border.”

GoFundMe contributions now go to a Florida-based nonprofit corporation, WeBuildTheWall, Inc. The articles of incorporation were filed with Florida's Secretary of State on Dec. 28, and Kolfage said Monday that a search is underway for office space in Miramar Beach.

WeBuildTheWall, Inc., is organized under Section 501(c)4 of the federal Internal Revenue Code, for purposes “including but not limited to funding, construction, administering and maintaining a United States Southern Border Wall and the processes associated therewith.”

In addition to Kolfage, the We Build the Wall website lists an advisory board and members of a number of committees addressing financing, construction, media and fundraising. Kolfage said he is taking no salary or other compensation, but some people who will be working full-time on the effort will receive some compensation.

As a tax-exempt 501(c)4 “social welfare” nonprofit, WeBuildTheWall, Inc. could engage in lobbying, but Kolfage said the organization will not pursue that option. The initiative has bipartisan support, Kolfage said, and lobbying one side or another could jeopardize that balance.

For the immediate future, Kolfage said, he and various committee members will be in Texas this weekend to talk with landowners whose property might be suitable for portions of the wall. They'll also be learning about environmental and zoning issues associated with wall construction, Kolfage said.