"When you have a service dog, the employment opportunities are so much narrower." 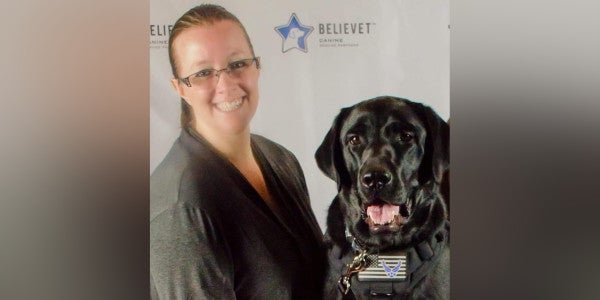 A military veteran who was denied use in her workplace of a service animal by her Twin Cities employer at the time has won $75,000 in a settlement brokered by state human rights officials.

The agreement, announced Wednesday by the Minnesota Department of Human Rights, includes not only payment to 34-year-old Laura Ritt to cover lost income, damages and legal fees, but imposes several policy and training requirements of Marathon Petroleum Corp., which employed Ritt at its St. Paul Park refinery until November.

A spokesman for the refinery declined to field questions Wednesday about the settlement, but the company objected in response to Ritt's request and made no admission of wrongdoing in reaching the agreement.

Ritt was hired as an administrative assistant in December 2014, soon after being honorably discharged as a staff sergeant with the Minneapolis-based 934th Airlift Wing, Air Force Reserve.

She said her departure from the refinery was in “mutual agreement” with management, and she has since been looking for work.

But “when you have a service dog, the employment opportunities are so much narrower,” Ritt said, given that such an accommodation would be difficult to impossible in areas such as food services or health care.

Ritt asked the refinery for permission in December 2017 to bring a service animal to work so she could perform her job free of symptoms from her chronic psychological disability related to her time in the military. Ritt said in an interview Wednesday that her disability stems from a physically traumatic noncombat incident that occurred in 2004 on military grounds soon after she completed basic training.

She alleged that the company repeatedly denied her requests, even when a psychiatric nurse practitioner explained that a service animal would keep at bay her symptoms, which include rapid heartbeat and breathing, sweating, muscle tension, nausea “and profound sadness, feeling detached from others, and avoiding activities or places,” according to a memo the Department of Human Rights released Wednesday.

The agency pointed out that River, the black Labrador retriever that joined Ritt's family in June 2018, also was trained to help her negotiate barriers in the refinery's buildings and remain calm when hearing sirens or alarms, similar to the ones that went off in the refinery.

The Department of Human Rights investigated and concluded that the refinery had violated Ritt's civil rights and “failed to prove the service animal would have disrupted the workplace, posed a health or safety risk, or caused a significant burden to the employer,” the agency's announcement of the settlement read.

In its denial, the refinery said it had “significant safety and practical concerns regarding the presence of an animal within the refinery gates related to emergency evacuation needs, alarms and other operational consideration” and added, “nor do we have information indicating that you are unable to fully and effectively perform your essential job functions without a service animal present.”

Marathon went on to point out that Ritt, who was hired in late 2014, would not accept other accommodations such as additional breaks during her shift, a quiet area and a private office.

Along with paying Ritt, the settlement requires the refinery to:

• Reform policies and procedures so reasonable accommodations are made to ensure employees with disabilities can work without facing discrimination.

• Provide to its workforce anti-discrimination and anti-bias training to address implicit bias, promote equity and inclusion, and prevent future discrimination.

• Work with the Minnesota Department of Employment and Economic Development's Vocational Rehabilitation Services to recruit qualified job candidates with disabilities to work at the refinery.