This Air Force Vet’s Husband Was Furloughed During The Government Shutdown. Then She Hit The Jackpot

Winning a lottery jackpot is always great, but one veteran said her recent prize was "especially timely," the Virginia Lottery reported: Her husband is a federal employee who is on furlough during the government shutdown, 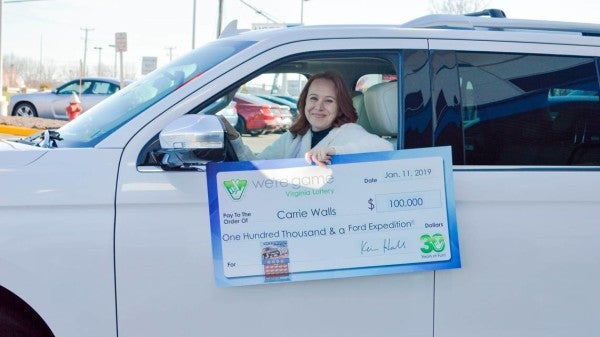 Winning a lottery jackpot is always great, but one veteran said her recent prize was “especially timely,” the Virginia Lottery reported.

That's because Carrie Walls' husband is a federal employee who is on furlough during the government shutdown, the lottery reported in a news release.

Her $100,000 jackpot came at the ideal time, but that was not her only prize. The 13-year veteran of the United States Air Force also received a Ford Expedition, lottery officials said in the news release.

Walls played in a Dec. 4 drawing that included “more than 554,000 entries,” according to the news release. She overcame odds of 1 in 1,387,200 to win the top prize in the contest that has multiple rewards, ranging from $5 to Walls' jackpot.

“I cried. I couldn't believe it,” Walls said about winning, the lottery reported in the news release.

After claiming her winnings Friday, Walls told lottery officials she has plans how to use the prizes, the news release states. Both the vehicle and the money will come in handy for an upcoming trip to Disneyland that had already been planned.

The Virginia Lottery said one more top prize remains in the contest, according to the news release.

SEE ALSO: Government-Employed Vets Are Getting Payless Paychecks As The Shutdown Drags On

WATCH NEXT: Who Gets Paid During A Government Shutdown