There's nothing quite like finding out that the nifty little trinket you blew a paycheck on when you were a junior enlisted service member is actually worth three-quarters of a million dollars. 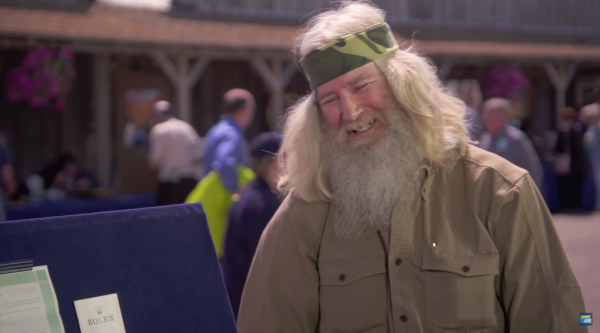 That was the reality for one Air Force veteran, and a dead-ringer for Jeffrey Lebowski — or The Dude, or El Duderino if you're not into the whole brevity thing — who was interviewed by expert appraiser Peter Planes for Antiques Roadshow (you know, that TV program your mom and dad watch).

In the video, the vet, identified only as David, explains that he bought the Rolex watch for $345.97 while serving as an explosive ordnance disposal technician in 1974.

But because the thing was just so damn nice, he never wore it, and because he held on to all the original paperwork and packaging, it's now worth anywhere between $500,000 and $700,000 at auction.

When he hears the news, David literally drops to the ground, as if he's being crushed under the vast sums of money he'll get once he sells it.

In fact, that would-be payday hit him so hard that Planes turned to the beaded vet and asked if he's “okay.” And while Antiques Roadshow bleeps it, and tosses up a black bar to cover his mouth, it's pretty clear what David's response was to the news: “You gotta be shitting me?”

Check out the clip below: