"What usually happens is the mom walks across the grate perfectly fine, but the ducklings end up falling right through." 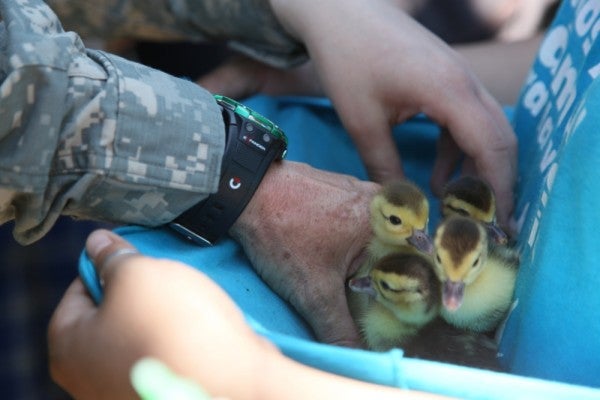 A momma mallard duck was reunited with six of her ducklings at Monroe Marketplace just before 9 a.m., thanks to the eagle eye of a Liverpool couple and the quick response of the Hummels Wharf Fire Company.

Craig and Crystal Warner were turning into the shopping plaza when they saw the mother mallard standing by a storm drain.

“We were driving into Giant and we saw the mother mallard duck standing by the drain with four of her little ones,” Craig Warner said.

They knew something didn't look right, and they checked the storm drain, said Warner, who was with the military police in the Air Force.

“My wife said I think there are more down in the drain because four isn't enough. Sure enough, there were six down there.”

He called the non-emergency dispatch number. He said the rescue crew was there in a few minutes.

They were dispatched at 8:46 a.m., according to a Snyder County 911 dispatcher.

Crystal Warner's daughter, Sara Lauver, of Selinsgrove, recounted the story on her Facebook page and posted a video of the rescue that Craig shot.

“They called the non-emergency number to see if someone was available to help and within minutes, the Hummels Wharf Fire-Rescue was to the rescue!” Lauver wrote on her page. “I’m sure that is one grateful mama duck on this Mother’s Day.”

Warner said he knows this happens just about every year.

“Somebody had commented this is the annual ducks down the drain,” he said.

Actually, it's more common than that.

Chris Eppley, Hummels Wharf Fire Company assistant chief, said firefighters get called out for animal rescues two to three times a year. This was the first this year. Usually, it’s ducks in the spring, but the first responders have been called for cats or kittens.

“Obviously by ducks, I do mean ducklings,” he said. “What usually happens is the mom walks across the grate perfectly fine, but the ducklings end up falling right through.”

When they are rescued, it is a feel-good story.

“Especially with the ongoing COVID crisis, everyone could use a feel-good story like that,” Eppley said.