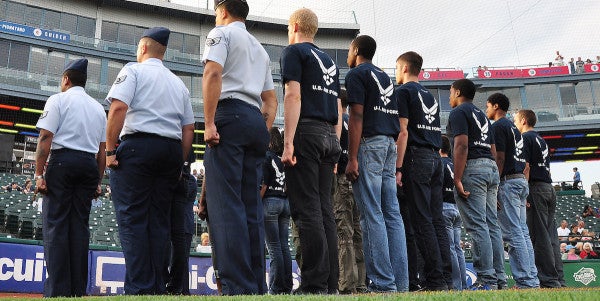 The Air Force has allowed more than 600 airmen to join its ranks despite having previously disqualifying medical conditions such as eczema and attention-deficit hyperactivity disorder, new statistics show.

Since the service implemented its expanded medical policy in January, 634 new airmen have received waivers for prior asthma, eczema or ADHD conditions, according to the latest numbers provided to Military.com.

“As medical capabilities have improved and laws have changed, the Air Force is evolving so we are able to access more worldwide deployable airmen to conduct the business of our nation,” Air Force Chief of Staff Gen. David Goldfein said at the time of the policy rollout.

The latest data come as the military services are grappling with how best to boost their ranks.

The Army made headlines this week about reported changes to its own waiver policy, though leaders on Wednesday emphasized that standards haven't changed and that recruits with a history of military health disorders still won't be allowed to serve.

Faced with a recruiting goal of adding 80,000 soldiers in fiscal 2018, Army leaders did acknowledge lowering the authority at which waivers could be approved from the headquarters level to the two-star head of Army Recruiting Command.

As for the Air Force, prior serious mental health issues bar recruits from service.

A spokesman for the Air Force didn't say whether officials were considering any potential changes to the policy for mental health waivers.

“We cannot speculate about the possibility of a future change in OSD policy,” Ed Gulick, the spokesman, told Military.com, referring to the Office of Secretary of Defense.

Of the four Air Force authorities reporting the medical waiver data, Air Education and Training Command had the most, with a total of 485 waivers, including 294 for ADHD — the most of any authority or waiver category, 100 for asthma and 91 for eczema.

“Each uses their own method of processing waiver requests and none of them are the same,” Gulick said in an email. “The Air Force Surgeon General level has oversight of these processes, but does not have direct access to these systems.”

The Air Force stressed that “the data does not separate or demonstrate which applicants might have been denied a waiver prior to 2017,” he said.

Furthermore, “the denominator is different for each of the waiver authorities, and the mix of enlisted to officer applicants varies by waiver authority or accession sources,” he said.

The Pentagon uses DoDI 6130.03, “Medical Standards for Appointment, Enlistment, or Induction in the Military Services,” as the standard by which all applicants are judged to be medically qualified or disqualified.

All prospective airmen must prove they are qualified and able to deploy anywhere in the world. But the process of determining medical qualifications is complex.

The Air Force uses a case-by-case approach because each applicant has a “unique medical profile.” It's “the most rational approach for waiver consideration,” he said.

Sometimes that calls into question how much time has elapsed for certain conditions.

Per Pentagon policy, those with any history of depressive disorders — including but not limited to major depression, dysthymic disorder and cyclothymic disorder — are not medically qualified and would require a waiver to enter the military.

Those who once required outpatient care through a physician or facility for longer than 12 months for these disorders are not considered.

Individuals who have exhibited a depressive disorder not otherwise specified within the regulation could also be disqualified. However, if a person did not require outpatient care for more than 24 cumulative months, they may be considered, according to the DoDI.

An applicant must also be stable, which is defined as without treatment for 36 months prior to choosing to join the armed forces and without inpatient treatment for a depressive-type condition.

“A period of time can be used in many ways depending on diagnosis, and can be used to define periods of treatment and periods free of treatment,” Gulick said. “A waiver could be requested for an applicant disqualified for any of these depressive-type diagnoses. However, the DoDI clearly delineates what is and is not medically qualified.”

Drug use is still a no-go.

A “medical diagnosis of substance-related disorders or addiction remains medically disqualifying for service,” the DoDI states.

Should an applicant not qualify for a waiver for a former medical condition the first time, can he or she apply a second time?

“From a medical perspective, if an applicant had a disqualifying condition or diagnosis the first time, medics … would want to know what has changed in the interim between the first time they applied and the second time,” Gulick said.

If there is new information available that was not previously available, or clarifying information on the diagnosis, it could help a recruit be considered once more.

It's one of the reasons ADHD and asthma were redefined earlier this year; data showed that more recruits exhibited past signs, but were immediately disqualified.

And with the new policy, the Air Force has accepted nearly 340 more airmen with an ADHD waiver.

The Air Force's expanded policy says that an applicant with a history of ADHD must demonstrate at least 15 months of performance stability — either academic or through the individual's occupation — off medication for the condition immediately preceding enlistment or enrollment.

Previously, if an individual was ever treated for ADHD as a child — and especially into adolescence — he or she was disqualified from military service under DoD policy.

The department relaxed some rules in 2010, and further amended how it granted waivers in 2015.

“Each service's waiver authority for medical conditions will make a determination based on all available information regarding the issue or condition,” Lt. Gen (Dr.) Mark Ediger, the Air Force's surgeon general, told Military.com in January.

Like the other services, the Air Force is willing to consider a waiver.

If an individual took a prescription for ADHD after the age of 14, “we needed to see a period of 24 months of demonstrated stability off medication before we considered them for a waiver” to join, Ediger said of the previous policy.

Recruitment Based on Risk

Should an individual apply to the Air Force within a window where he or she remains uncleared from a past diagnosis, the applicant can request a second look after six months.

There is no “absolute deal-breaker for someone to be disqualified from receiving a waiver” for some of these conditions, Gulick said.

“The 'waiver program' is not an entitlement for applicants, but rather a process by which a risk assessment is made to determine risk to the mission and individual applicant,” he said.