Fifteen months after a paddleboard accident left her an amputee, Air Force Capt. Christy Wise is retaking her place in... 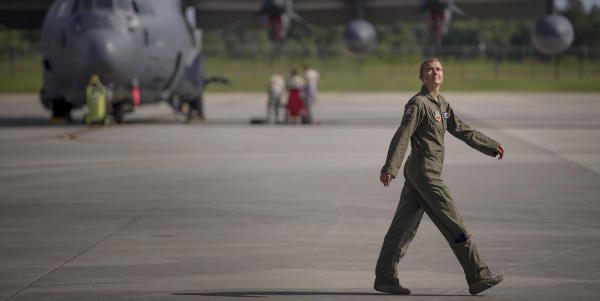 Fifteen months after a paddleboard accident left her an amputee, Air Force Capt. Christy Wise is retaking her place in the skies.

Though her journey back to the cockpit of an HC-130J Combat King II was filled with bumps and hurdles, the pilot’s return this week makes her the sixth amputee and the first female above-the-knee amputee to fly.

“In this day age it’s nice to be able to show girls out there everywhere that you’re capable of anything if you put your mind to it,” Wise said in an Air Force statement. “I am the first female, which is funny because I don’t ever think of myself as a female pilot, but as a pilot.”

Wise, who is assigned to the 71st Rescue Squadron at Moody Air Force Base, Ga., lost part of her leg after a boating accident in April 2015. Wise was struck by a speeding boat while lying on her paddleboard stargazing near Shalimar, Fla, she told The Washington Post in June 2015. In the article, Wise describes making a tourniquet out of her boyfriend's shirt after the boat's propeller caught part of her right leg.

It took 15 months of rehabilitation, including learning to walk and run again, but she never lost the desire to fly.

“For me, I never even considered not getting back to flying,” she said. “I was going to do whatever it took to get back to flying because this is my job and this is what I love.”

Wise credits her fellow airmen and other amputees with helping her overcome obstacles to meet the Air Force’s physical requirements and deal with the challenges of limited mobility.

“It is no surprise that she is back in the cockpit,” said Col. Thomas Dorl, 347th Rescue Group commander. “Her ability to overcome anything in the face of adversity, stay positive and motivated, all the while continuing to get back in the cockpit is a true testament to her resiliency.”