The U.S. Air Force’s Hurricane Hunters, based at Keesler Air Force Base in Biloxi, have spent, by conservative estimate, more... 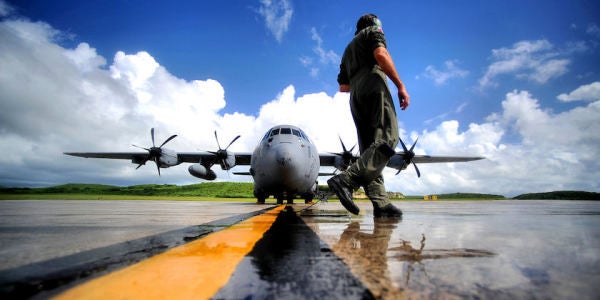 The U.S. Air Force’s Hurricane Hunters, based at Keesler Air Force Base in Biloxi, have spent, by conservative estimate, more than 100 hours inside Hurricane Matthew.

You may have heard of them. A Discovery Channel show featuring the unit — officially known as the 53rd Weather Reconnaissance Squadron under the 403rd Wing of the Air Force Reserves — aired for two seasons.

Or maybe you haven’t heard of them.

But if you’re one of 2.5 million people in four states who evacuated their homes in advance of Matthew — or one of the millions more who may be in the storm’s path, or one of the many more people nationwide who are following news of the storm, or for that matter have ever turned to the National Hurricane Center to decide what to do — you’ve probably used information gathered on a Hurricane Hunters mission.

Related: 4 Lessons The Military Learned In The Wake Of Hurricane Katrina »

“Especially with this kind of storm, where it’s so close to the east coast, any variation of diversion in the track can mean a lot to the people on the coast and the structures there,” said 1st Lt. J. Kelsie Carpenter, an aerial reconnaissance weather officer. “The better information we get, the more-accurate information we get, the better (the National Hurricane Center) can fine-tune the forecast and hopefully keep people safe.”

The mandate of the Hurricane Hunters is simple: Collect data on storms so the NHC can provide the best forecast possible. They fly, literally, into the eye of the storm.

The strength and path of a storm can change frequently. Matthew has fluctuated in strength and the path has changed even more frequently than the average hurricane, said Capt. Lucas Caulder, a pilot with the squadron. At one point, it seemed one Hurricane Hunters mission brought information the storm was weakening, and the next that it was strengthening, then weakening again. Most recently, it weakened slightly and stayed further off the Florida coast than expected Friday, though the state still saw devastating effects.

But accurate forecasting is crucial to help people make the best decisions about evacuations and to help government and emergency management officials know what orders to issue.

Be too cavalier and people could remain in the storm’s path, putting lives unnecessarily at risk.

“Better safe than sorry” isn’t necessarily the way to go when issuing evacuation orders, either. Crowding evacuation routes and shelters with people who didn’t need to leave can make it harder for those who legitimately needed to flee. And one too many false alarms can leave people jaded and less likely to heed the next evacuation order.

That’s why “we’re watching this storm every second of every day,” Carpenter said.

The Hurricane Hunters collect data using a device called a dropsonde — it looks like a cardboard tube with a string sticking out of one end — launched from the aircraft into the storm. They float to the ocean’s surface with a parachute and on the way down collect information on pressure, wind speed, wind direction and all the other factors that go into predicting a hurricane’s trajectory. The devices relay that information back to the aircraft where it is analyzed by aerial reconnaissance weather officers, basically the onboard meteorologists, and then passed to the NHC.

The mission that left Keesler at 4 a.m. Friday released 20 dropsondes. Hurricane Hunters officials allowed the Sun Herald to accompany them on a very bumpy ride.

This mission made six passes through the storm, crossing the eye each time.

It recorded a maximum sustained windspeed of 120 mph at 10,000 feet, the altitude maintained on the flight, and 110 mph on the surface.

“We got a lot of good information, everything we were hoping to get,” Carpenter said. “A lot of good data we can give to the National Hurricane Center.”

“We learned that it’s a strong storm. It’s slowly weakening but its proximity to the coast is why it’s important (to keep tabs on) and why we’re flying it pretty much around the clock.”

So meet one of the many crews that have been flying nine- or 10-hour missions around the clock.

On the flight Friday, aircraft commander Lt. Col. Dwayne Russell was in charge. Caulder and Lt. Col. Jim Burgess piloted the C-130J through winds that at times almost pushed the plane sideways.

“There’s really no simulator that can get us prepared for the mission,” Caulder said. “We just have to learn on the job. It takes a good season to get prepared and developed and able to perform the job by yourself.”

Sgt. Jenna Daniel was the loadmaster responsible for the dropsondes and 13 other sensors for the Navy, which also had a representative on the flight.

The Hurricane Hunters maintain 10 aircraft that fly into everything from tropical depressions to hurricanes and the occasional winter storm. The National Oceanic and Atmospheric Administration also has a team called the Hurricane Hunters, but it is a distinct unit that consists of three planes and focuses largely on research as opposed to forecasting.

Matthew — and other storms

The Keesler Hurricane Hunters crew members wear a number on their flight suits indicating how many times they’ve flown through the eye of a hurricane. Before last week, Caulder’s was 68. Now he estimates his number is 95.

The squadron has been working nonstop on Matthew. Just as the flight the Sun Herald reporter was on headed back to Biloxi, the next flight was readying for its first pass through the hurricane.

After completing a flight over the Gulf of Mexico, a 53rd Weather Reconnaissance Squadron WC-130 Hercules is hosed down at Keesler Air Force Base, Miss., June 5, 2013. The water pressure removes salt that accumulates on the aircraft when it flies through storms over the ocean.

“We’re proud of what we do here,” Caulder said. “We feel it provides a service for the people of our community and our country. The information gets to (the people) as soon as possible so they can make the proper decisions on whether to hunker down or get out of town.”

Carpenter said, “We understand the importance of the mission. We’re thankful to be able to do it. We take a lot of pride in providing that information and hopefully keeping people safe.”

As of Friday evening, it appeared Matthew had spared Florida’s most heavily populated stretch from a catastrophic blow but still threatened cities such as St. Augustine, Florida; Savannah, Georgia; and Charleston, South Carolina.

It’s left, at last count, at least 800 dead in Haiti and likely more.

And there is a chance it could still hook around and hit the stretch of Florida it skirted Friday.

Also, there’s another hurricane in the Gulf — Nicole.

The Hurricane Hunters haven’t started flying through that storm — yet. They’ve been a little busy.