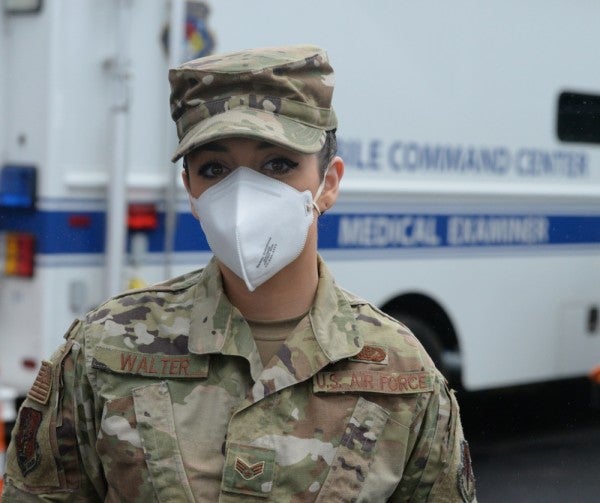 They were trained to find bodies in the aftermath of a nuclear disaster or a biological or chemical weapons attack.

Now, members of the New York Air National Guard’s 107th Attack Wing Fatality Search and Recovery Team, based in Niagara Falls, have been deployed to New York City to recover the dead from hospitals, nursing homes and apartment buildings.

“We’re trying to keep an accurate count,” said 1st Lt. Shawn Lavin, the commander of the 13-member team. “Things have picked up more in the last couple of days. We’re working 12-hour days, doing an average – with my team, and I’ve got more people assigned to me now – 30 to 45 a day. That’s on average.”

Lavin’s team is set up outside Bellevue Hospital on First Avenue in Manhattan, next to where the New York City Office of the Medical Examiner has set up a massive temporary morgue – a sea of refrigerated tractor trailers capable of holding thousands of remains should that become necessary.

Lavin, 39, of Amherst, is a married father of two young children. He works in Erie County’s Human Resources Department and has served on the Amherst Town Board since 2018. He’s been a member of the Air National Guard for 16 years and joined the Fatality Search and Rescue Team about a decade ago, when it became part of the 107th.

He talked about what his team has experienced over the previous two weeks in a phone interview from Manhattan Tuesday morning, the same day the governor announced 731 deaths overnight, most of them in New York City.

It was the start of the team’s third week in New York, which has become America’s Ground Zero in the Covid-19 pandemic.

Lavin recounted how his commanding officer called him on the morning of March 21 – a Saturday – to tell him his unit was being activated.

“He called me and told me to get ready,” Lavin said.

Lavin’s team had never been deployed to an actual disaster before. But they’ve been training for years, being sent twice a year all over the country.

“We train on independent breathing apparatus, Level C [haz-mat] suits, all sorts of equipment like for measuring radiation levels,” he said.

Two days after the call, the team gathered at the Air Reserve Station in the Falls to get their vehicles and equipment ready.

“They have racks that are assembled inside in the off chance you have to hold remains,” Lavin said.

They packed up stacks of PPEs – personal protective equipment – including face masks, face shields, tear-away gowns and covering for shoes.

“We didn’t bring our biological suits. We have some on hand. But this isn’t one of those kinds of incidents. They’re not conducive to working in tight environments,” Lavin said, like the tiny apartments all over New York City.

The team left the Falls on the morning of March 24 and arrived in New York City that evening, driving over the George Washington Bridge into Manhattan.

“We parked our trucks next to the Office of the Chief Medical Examiner down by Bellevue Hospital,” Lavin said.

The next morning, they met with the city Medical Examiner’s Office and set up a plan on how the Air National Guard team would assist in the difficult and delicate task of locating and transporting the remains of people who died amid the pandemic.

“The city hospitals are at or just about at their capacities,” Lavin said. Most people have an idea of what that means for doctors and nurses. But it’s also having a “downstream impact,” Lavin said, on hospital morgues and funeral homes.

Normally, the city medical examiner would send two workers to retrieve a body.

But with things anything but normal, the new protocol is to send one medical examiner employee with two to three military personnel, he said.

“They handle the administrative things, all the paperwork,” Lavin said. “My unit, we do the lifting, the moving, all the other stuff.”

The team members follow the medical examiner’s workers in their own pickups, which have been tough to navigate through some of Manhattan and Brooklyn’s neighborhoods.

“We follow them to a location and my team will go in and make an assessment, take a look at what needs to be done, what proper PPE is needed,” Lavin said. “And then we assist.”

'Thank you for being here'

On many occasions, they’re asked to retrieve the remains of people who died at home inside their elevator-less apartment buildings.

“We have to go up and down the stairs if the elevator isn’t working,” he said. “It’s a real challenge. It’s physically challenging, and, also mentally.”

Lavin’s team is among several military units assisting in the somber work, so he doesn’t know the total number of bodies being found every day. But he said his team has been averaging 30 to 45 a day. Earlier in the mission he went along on the retrievals, Lavin said, but now, he’s handling coordination efforts outside Bellevue.

When the team arrives at a scene, they know they’re walking into an emotional and stressful situation.

They know it’s jarring for civilians to see the airmen dressed in their air battle uniforms with face masks and blue medical aprons arriving in their neighborhoods.

“A lot of people take pictures of us doing this process,” Lavin said. “That’s understandable. In New York City, this isn’t the norm. At the same time, we’ve encountered a lot of ‘thank yous’ and ‘thank you for being here.’”

He’s awed by the work of his team members.

While they’ve been on numerous training missions together, there was no way, he said, to prepare for something like what they’re doing now.

“But this is what’s being called and asked of you,” he said. “They are finding a way to persevere.”

The team members are handling their task with dignity and strength. “They don’t make a remark. They just get to work. It’s a really humbling experience to see what they’re transforming into.”

There’s an obvious emotional toll to their work and Lavin said the members are all taking care of each other. They’ve received care packages and are heartened by all the text messages and emails they get from their families, friends and co-workers back in Western New York.

“It’s really nice to know people are thinking about us,” he said.

He’s deeply thankful to his and his team members’ families and employers for their efforts back home while they’re gone. “All these people are making sacrifices, too, and that goes a long way to keeping the mechanisms working here,” he said.

With their operation based by the makeshift morgue and right next to the FDR Highway, Lavin said, he hasn’t had the chance to experience the nightly cheering sessions that New Yorkers are engaging in for medical workers on the front lines.

In the meantime, he said he hopes that people outside New York realize how serious the situation truly is.

“I would encourage them to follow the advice on the social distancing piece,” he said.

Lavin doesn’t know how long his team will have to stay in New York City.

“I think we’re here until they don’t need us anymore,” he said.