An aircraft that regularly carries U.S. troops through Ireland's Shannon Airport caught fire shortly before it was due to take off on Thursday 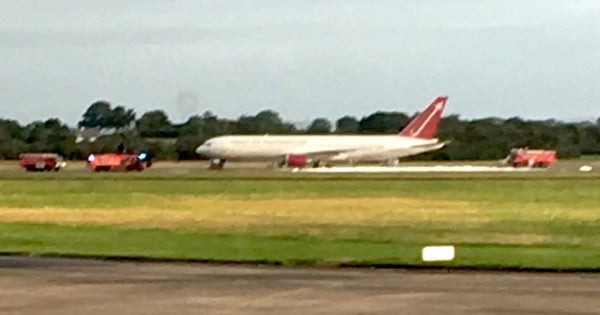 DUBLIN (Reuters) – An aircraft that regularly carries U.S. troops through Ireland's Shannon Airport caught fire shortly before it was due to take off on Thursday, national broadcaster RTE reported, forcing the suspension of flights at the airport.

Shannon Airport said on Twitter that operations had been temporarily suspended after an incident involving a Boeing 767-300 aircraft. All passengers and crew disembarked after emergency services were called to the scene.

Air traffic controllers noticed a fire and smoke coming from the landing gear of an Omni Air International Boeing 767-300 as it taxied along the runway, RTE and the Irish Times reported.

RTE quoted a witness at the scene as saying he saw foam being sprayed on one of the engines after it was stopped.

Omni Air International is a civilian airline that says it transports U.S. and foreign military troops and military family members around the world.

In a Twitter post, Omni Air said it was participating in an investigation of the incident after the aircraft “rejected takeoff” and was safely evacuated. Initial reports indicate no serious injuries to passengers or crew, it added.

Ireland provides landing and refueling facilities to the U.S. military at the western Irish airport, the country's second busiest, particularly for transatlantic flights.

An average of around 300 U.S. troops passed through Shannon Airport each day in the first three months of the year, according to Ireland's Transport Ministry.

Airport staff were working to remove the aircraft and resume safe operations, Shannon added on Twitter, saying that American Airline passengers would not be checked in until further notice.

Other passengers were advised to continue with check in.

A spokesman for the airport could not be reached for further comment.