Under heavy fire during a massive Taliban ambush, this airman broke cover to save his teammates

On Friday, Tech. Sgt. Cody Smith was awarded the Silver Star for his actions during the Oct. 14, 2018 ambush in Afghanistan. 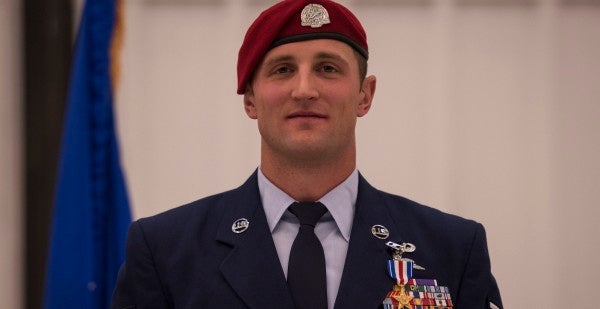 ALBUQUERQUE, N.M. — U.S. Air Force Tech. Sgt. Cody Smith was hit by enemy fire in October 2018 during an ambush by a 600-member Taliban force in Afghanistan.

But his wounds didn't stop him from leaving cover to save the lives of his fellow soldiers, or from assisting with civilians who were wounded or killed in the firefight.

The airman from Iowa, who is stationed at Cannon Air Force Base near Clovis, has been awarded the Silver Star for his actions on Oct. 14, 2018. He received the medal Friday during a ceremony at Cannon.

Smith said he was just doing his job.

“It's unreal and humbling,” Smith said during a phone interview this week. “Amongst my peers, I don't feel remarkable or special.”

Smith is a combat controller with the 26th Special Tactics Squadron, based at Cannon. He was deployed with a special operations forces team during Operation Freedom's Sentinel in support of the Resolute Support Mission during Afghanistan's national parliamentary elections.

According to the Air Force Times, which named Smith the 2019 Airman of the Year, Smith took part in a series of battles over a two-week period during the operation, including an intense eight- to 10-hour firefight on Oct. 7, 2018.

“I think the biggest thing for me was knowing that the team was relying on me and I was relying on the team to carry out their responsibilities in the same manner,” the 28-year-old said. “… I would not be here today without my teammates.”

His team consisted of 12 Green Berets, Smith, a pararescueman, five Army infantry drivers, and an intelligence personnel. They also had 65 Afghan troops as allies.

“I was just focusing on doing my job to the best of my ability,” Smith said of the attack on his team's convoy. “I was trying to utilize every asset (the force had at its disposal).”

He said he was focused on “breaking the gunfire,” which rained down during a constant mortar barrage.

“I don't feel I did any more than my job on the battlefield,” Smith said.

Though hit by hostile fire and with mortar shells impacting as close as two meters away, Smith exposed himself to danger while controlling air strikes and assisting dozens of civilians injured and killed during the ambush, the Air Force said.

He coordinated attacks from F-16 Fighting Falcons and AH-64 Apache helicopters, which used 500-pound guided bombs as close as 90 meters away.

Although he suffered a concussion, Smith continued to control air strikes to neutralize remaining threats.

“I knew that having the ability to communicate with our aircraft and to deliver airstrikes was paramount … in our ability to maneuver through this ambush,” he said.

He also remained with his team for the 14-hour vehicle movement back to friendly lines to ensure their safety. Smith said he was thankful he was able to help keep his fellow soldiers safe “and helped them return home.”

Yet, Smith dismissed his actions as nothing more than actions other members of his team had done.

“I know there have been so many people before me and around me, and teammates who do incredible things each and every time they step outside the wire,” he said.

A veteran of multiple deployments in the Middle East, he has attended ceremonies when others have been awarded the Silver Star.

“Those are people that I've looked up to and try to emulate,” he said, adding that he hoped to be a model for others.

He also said that, as an active airman, he recognizes his days of deployment may not be over.

Smith said he is grateful for the support his church and community have shown his family since he has been stationed in eastern New Mexico. He has been at Cannon since August 2016.

According to a Department of Defense website, the Silver Star is the third-highest military combat decoration that can be awarded to a member of the U.S. armed forces. It is awarded for gallantry in action.