Prosecutors have declined to pursue the death penalty in the case. 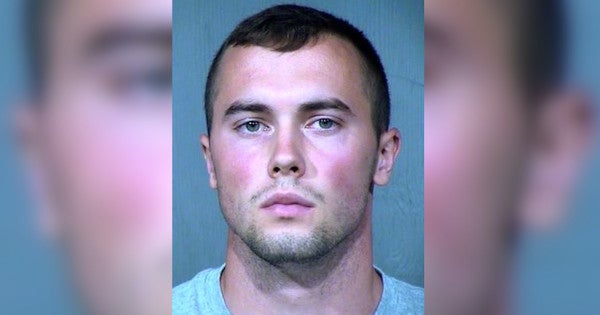 A Coconino County judge set the bond for 21-year-old airman Mark Gooch at $2 million in cash on Thursday after the state declined to pursue the death penalty in the case.

The hearing was set after Matthew Springer, Gooch’s attorney, requested the judge make his client eligible for bond at a hearing last week. Prosecutor Ammon Barker said he understood that defendants can only be held without bond in capital cases, but requested Judge Cathleen Brown-Nichols to make it a high bond amount in light of the charges.

The family of the 21-year-old victim, Sasha Krause, informed the court they opposed any sort of modification to the airman’s bond.

Gooch is accused of traveling to a Mennonite community in New Mexico, kidnapping Krause and killing her in the forests of Coconino County. Krause was found dead from a gunshot wound and her hands bound with duct tape.

During the virtual court hearing, Barker also shared new information that the Arizona Department of Public Safety crime lab has shown the bullet found in Sasha Krause’s neck came from Gooch’s rifle. Gooch's brother, Sam Gooch, has also been charged with hindering a first-degree murder prosecution to pick up the rifle prosecutors now allege was used in the incident.

“I think that the weight of this evidence is very strong. I’m very confident in it. That is one reason why the state is not making [a plea] offer in this case,” Barker said.

Springer began his argument stating his client should have a bond set given the lack of the death penalty. He also felt the conditions of release could address the victim's concerns if the judge felt that was necessary. Barker argued that the evidence and crimes accused against Gooch proved he was a threat to the community. Barker asked the judge to set the bail amount at $2 million.

Despite the evidence against his client, Springer said Gooch is still presumed innocent until proven guilty under the law. Gooch’s attorney argued his client’s lack of criminal history and time spent growing up in a Mennonite community should work in his favor.

“I understand the views of the victim or victims in this case given the nature of the charges in the case that they would be against release,” Springer said. “I do think that he is certainly entitled to bail as a matter of law under the Arizona constitution.”

Brown-Nichols agreed that bond should be set in the case, and reviewed the several factors when setting the bond, including victim’s statements and the accused crimes.

“After the court weighed and considered all the facts placed on record, it does modify release conditions,” Brown-Nichols said. “The defendant shall not, and cannot, be released unless he posts a $2 million, cash-only bond.”

After the decision was made, Barker updated the court to share that while prosecutors won’t be offering a plea deal, the Coconino County Attorney’s Office would be open to hearing offers made by the defense. Otherwise, Barker said, he was ready to discuss trial dates.

Springer said there were many pages of evidence he still has to review, and asked to delay discussing dates until he had reviewed all of the evidence.

The next hearing on the case is set for September.