He was arrested earlier this week. 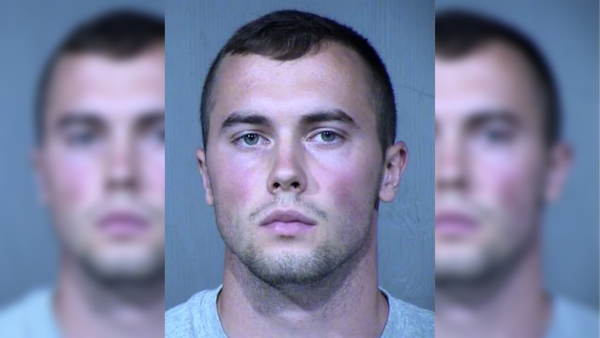 Mark Gooch, an Airman First Class in the U.S. Air Force, is believed to have beat Sasha Krause and shot her in the head before her body was found in February.

The new information about how Krause was found outside of Sunset Crater Volcano National Monument was shared by Coconino County Prosecutor Ammon Barker during Gooch’s hearing Friday morning. Gooch appeared by video streamed from the Coconino County jail, a new step in the judicial process due to the coronavirus.

Gooch had been transported to Coconino County jail from Maricopa County jail, where he had been held since his arrest on Tuesday.

Krause, the 27-year-old victim, lived in a Mennonite community in Farmington, New Mexico, where she was a Sunday school teacher. She was first reported missing on Jan. 18, and was later found on Feb. 21.

Gooch, a 21-year-old who is based out of Luke Air Force Base in Glendale, is charged with first-degree murder, kidnapping and theft, according to a complaint filed in the Flagstaff Justice Court.

Barker asked that Gooch be held without bond, citing Gooch’s military training in addition to the severity of the alleged crime as reasons. Matthew Springer, Gooch’s attorney, argued that the defendant had no prior criminal history and family support.

Judge Howard Grodman ruled to hold Gooch without bail, but set another bail hearing for May 1.

Due to restrictions stemming from the coronavirus pandemic, grand jury proceedings are not required to avoid gathering people for the jury. Because of that, the case is expected to be bumped up to Coconino County Superior Court.

Jon Paxton, spokesman for the Coconino County sheriff's office, said they’re continuing to work on the case with many other local, state and federal agencies.

“Everybody wants to know the motive and so do we. We’re working in that direction,” Paxton said. “The most important thing for us obviously is that we maintain integrity to ensure we get Sasha and her family justice.”