An Air Force combat controller who risked his life during a battle to retake the northern Afghanistan city of Kunduz... 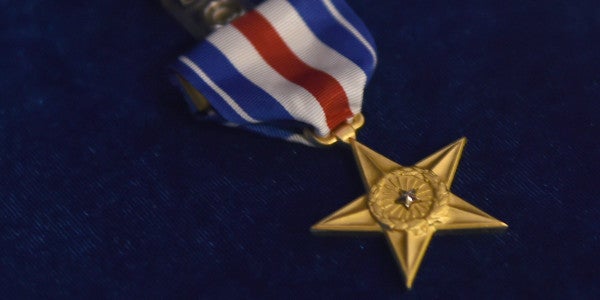 An Air Force combat controller who risked his life during a battle to retake the northern Afghanistan city of Kunduz in 2015 will receive the Silver Star in a ceremony on Fort Bragg next week.

Tech. Sgt. Brian C. Claughsey, part of the 21st Special Tactics Squadron, will be honored with the medal, the third-highest award for valor offered by the U.S. military, in a ceremony slated for Friday.

According to officials, he provided important support during operations to liberate Kunduz from Taliban control, protecting U.S. and Afghan forces while directing 17 close air support strikes from AC-130U and F-16 aircraft.

The Silver Star will be the latest in a lengthy history of valor from the 21st Special Tactics Squadron since the start of the wars in Iraq and Afghanistan.

The unit, based at Fort Bragg’s Pope Field, is the most decorated in modern Air Force history, with four of the nine Air Force Crosses awarded since 2001 and 11 Silver Stars earned by the squadron’s airmen.

The medals have come not because the unit seeks them, but because its members often serve their country in the most dangerous of positions, officials said.

“Airmen like Brian honor the Air Force's incredible legacy of valor,” said Lt. Col. Stewart Parker, commander of the 21st Special Tactics Squadron. “Like those who've gone before him, he serves our nation with no expectation of recognition.”

According to the squadron’s higher command, the 24th Special Operations Wing at Hurlburt Field, Florida, Claughsey recently completed Special Tactics Officer assessment and has been selected to become an officer. He will soon attend Officer Training School before commissioning as a second lieutenant.

“Brian is an exemplary airman and leader — he is a prime example of the professionalism, courage, and tactical know-how of the Special Tactics operator force,” he said. “In a violent, complex operating environment, Brian decisively integrated air power with ground operations to eliminate the enemy, and save lives.”

An official description of Claughsey’s actions said he was part of a force that deployed to Kunduz on Sept. 28, 2015, after the city had fallen to an estimated 500 Taliban insurgents.

He volunteered to ride in the lead convoy vehicle to assume close air support duties during the movement into Kunduz and immediately took control of an AC-130U when the troops were ambushed upon entering the city.

Claughsey directed precision fires on an enemy strong point to protect the convoy. During a second ambush, he coordinated friendly force locations with an overhead AC-130U while directing “danger close” strikes.

When a vehicle-borne improvised explosive device forced the convoy to stop in the middle of a four-way intersection, Claughsey suppressed the machine gun fire of six insurgents with his rifle while still coordinating with the AC-130U. He directed the crew on the plane to destroy the enemy fighters and helped shield the convoy from follow-on attacks as it made its way to the compound of the Kunduz provincial chief of police.

There, the American special operators and Afghan forces came under attack by Taliban mortar fire. According to the narrative of the battle, Claughsey maneuvered as close to the mortars’ origin as possible to pinpoint the location to an overhead F-16. He then controlled numerous strafing runs on the mortar position to eliminate the threat.

After helping to destroy the enemy mortar position, Claughsey moved to suppress enemy fire to allow another airman to direct another F-16 strike on the other side of the compound. He then stood exposed to enemy fire to hold a laser marker in position on an enemy building, directing two “danger close” strikes on the building from the F-16.

Those strikes killed an unspecified number of enemy attackers, effectively ending the attack on the Kunduz police compound.

Claughsey, from Connecticut, enlisted in May 2008 and became a combat controller in February 2014, after two years of rigorous training, according to officials. He has deployed twice, once to Afghanistan and once to Kuwait as part of a global access special tactics team to survey and establish airfield operations.