‘One hell of a patriot’ — Combat airman who played Taps for over 5,000 veteran funerals dies at 98

As mourners gathered at veteran funerals, Otto always stood at parade rest, apart from the crowd. In 100-degree heat or the chill of winter, Otto wasn't about to sit down while on duty. 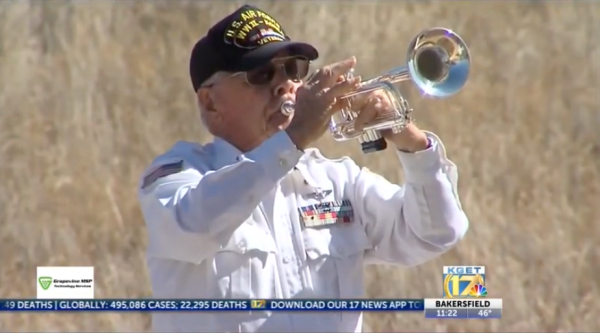 Bob Otto flew 56 combat missions from the cockpit of a Douglas B-26 Invader during the Korean War.

Later he served 30 years as a classroom teacher, 26 of them at East Bakersfield High School.

And even later in life, in an astonishing act of love and respect for his fellow veterans, Otto played the soulful notes of taps as a volunteer at more than 5,000 veteran funerals.

The combat airman, accomplished educator and volunteer superstar died Thursday at his home in northeast Bakersfield, his son, John Otto, at his bedside. He was 98.

Otto was not the type to brag about what he did in the war, Carter said, even though what he did was astonishing.

“He was one hell of a patriot,” Carter said.

'The war isn't over'

Born in 1921, Otto grew up on the “old Kern front” in the days when homes, schools and even a store were erected in the midst of the Kern River oilfield.

When Gertrude Stowell, a teacher at Petroleum School, asked the young Otto to play the horn during flag ceremonies, he jumped at the chance.

He worked about six months at Douglas Aircraft in Long Beach before enlisting in the branch of service that would later become the U.S. Air Force.

After years of training other fighter pilots at home, Otto was on the cusp of deployment to the war in the Pacific when news came of the Japanese surrender.

He and some other officers were going to dinner when a sergeant walked up to them and, using scissors, cut off all their ties.

“He said, 'Sir, the war is over.' And it was,” Otto told a Californian reporter nearly 20 years ago.

The young military veteran took advantage of the post-war G.I. Bill to go back to college and earn his teaching degree. He and Etta, the love of his life, were married on Christmas Day 1946.

“It was the only day she could get off from her job at the phone company,” said John Otto.

In 1950, America was thrust into another war, this one in Korea, and the budding teacher was recalled to serve as a co-pilot with the crew of a B-26 light attack bomber.

Most of the 56 missions Otto flew were night missions, and he remembered his crew taking out several supply trains, including ammo shipments that caused spectacular fireworks in the night sky.

But it was a dangerous game.

Once a 20 mm shell blasted through his plane's left wing. It missed the fuel cell, but Otto could see the protruding metal glowing a fiery orange-red.

The crew made it home safely, but they had come within inches of disaster.

On the wall of a spare bedroom in Otto's home hangs a Distinguished Flying Cross and five Air Medals, mute testament to his service during wartime.

But his presence at thousands of military funerals may be just as significant as his military service and his career in education.

He and Etta would remain married nearly 70 years, until Etta's death in 2016.

'Some people have a gift'

“Some people have a gift,” longtime friend Larry Romero, another volunteer at countless military funerals, once said of his friend.

Otto didn't have to tell people what to do to get things done, Romero said. People just naturally followed him.

“Mr. Otto led an incredibly selfless life,” said Dick Taylor, retired director of the Kern County Veterans Service Department. “He was my geography teacher at East High, rifle coach there, tire store customer, friend, and one of my greatest allies when I was hired as director.”

One cannot measure the impact Otto has had at thousands of veterans' funerals. As mourners gathered, Otto always stood at parade rest, apart from the crowd. In 100-degree heat or the chill of winter, Otto wasn't about to sit down while on duty.

Finally, on cue, he would raise the gleaming cornet to his lips and pierce the morning silence with the somber notes that somehow are able to cause pain and heal hearts simultaneously.

It's a melody that can bring tears to the eyes of the toughest Marine, soldier, sailor or airman.

Now his years of service are over, and the question must be asked: Who will play taps for Mr. Otto?

Who will have the honor?