Airmen Can Now Get Tatted Up Under New Air Force Policy

The Air Force made significant revisions to its tattoo and medical exemption policy for new recruits, aligning its rules closer... 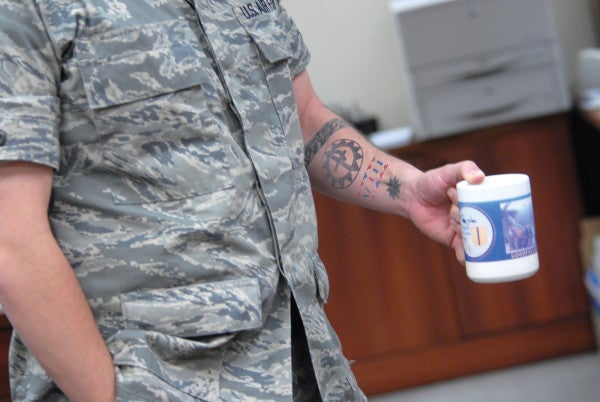 The Air Force made significant revisions to its tattoo and medical exemption policy for new recruits, aligning its rules closer to other branches of service, the Air Force said Tuesday.

“We are opening the aperture on certain medical accession criteria and tattoos while taking into account our needs for worldwide deployability and our commitment to the profession of arms,” Air Force Secretary Deborah Lee James said in a statement.

One of the most significant changes is the elimination of the so called “25 percent rule,” which barred recruits from tattoos covering more than one-quarter of their extremities, such as arms, legs and backs, said 1st Lt. Erin Ranaweera, a spokeswoman for Air Force recruiting.

The elimination of the rule will now allow for “sleeve” tattoos, which cover significant portions of arms and legs and are popular among young people the Air Force looks to target for recruitment.

Air Force officials hope the change will slow hemorrhaging of recruits to other services who sought more relaxed tattoo policies. The Army and Navy allow sleeve ink, though the Marines still have restrictive policies on the size of tattoos, Stars and Stripes reported in June.

The Air Force tattoo policy has been in effect since 1998, according to service dress and appearance manuals. But the Air Force reviewed the tattoo policy in the last year and determined it was out of step with the other services, Ranaweera said.

“Ours was the most stringent,” she said. “It kept us from recruiting folks, which meant we referred them to other services. It is great for them, but not great for the Air Force.”

The Air Force has a target of 325,000 active-duty airmen this fiscal year, Ranaweera said. There were slightly more than 317,000 airmen as of November, according to Pentagon data.

About 50 percent of potential recruits have tattoos, with as many as 20 percent of them with potentially disqualifying ink, the Air Force release stated.

An odd quirk to the tattoo policy was also changed, Ranaweera said. Previously, new recruits were prohibited from single band ring tattoos, though airmen were permitted that type of tattoo once they were in the force.

Now potential recruits with ring tattoos on their fingers can move through the evaluation process, she said. Tattoos on arms are permitted up to the wrist.

The Air Force, along with the other branches, still restrict racist, sexist and other discriminatory symbols, the release stated. Tattoos that violate policy are screened during initial medical evaluations in medical depots before recruits join basic training.

Potential recruits will be given waivers for minor eczema, while candidates with attention deficit hyperactivity disorder must demonstrate 15 months of school or job performance without medication to be considered. Candidates with asthma must past an objective breathing test to receive a waiver, the release stated.

Other changes include policies on marijuana use before the recruitment process. Previously, recruiters had a cap on enlistees who used the drug as a civilian, which is now legal in various forms in 26 states and the District of Columbia.

Legal proceedings relating to marijuana use will be reviewed, the release stated.

Air Force recruiters, most often the first personnel who meet civilians interested in joining the military, were instrumental in the policy change after reporting the often frustrating limitations placed on willing recruits, Ranaweera said.

“Recruiters helped supply data to headquarters to help us change the policy forever,” she said.