Dashan Briggs, a National Guard aviator from Port Jefferson Station who was killed last week in a helicopter crash in... 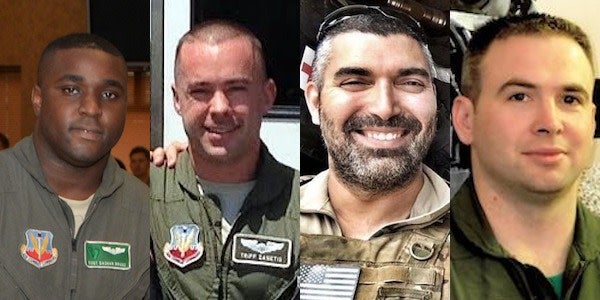 Dashan Briggs, a National Guard aviator from Port Jefferson Station who was killed last week in a helicopter crash in Iraq along with three other members of the 106th Air Rescue Wing, has been posthumously promoted to the rank of technical sergeant, according to a Guard spokesman in Albany.

Briggs, 30, held the rank of staff sergeant when he died.

The airmen, based at Gabreski airfield in Westhampton Beach, were among seven U.S. service members killed March 15 when their helicopter crashed near the Syrian border in western Iraq. Military officials said the crash did not appear to be caused by hostile fire.

Members of the 106th — who specialize in rescuing downed aircrews and other American forces trapped behind enemy lines — were sent to Iraq in late January in support of American efforts to confront ISIS in Iraq and Syria.

The bodies of the airmen are currently at the Defense Department mortuary at Dover, Delaware, and are not expected to arrive on Long Island until sometime next week, according to National Guard officials.

The promotion recommendations for Briggs’ three comrades must go through a different approval process because of their higher ranks — a process that has not yet been completed, Goldenberg added.

“There is no prediction right now of how long those promotion requests may take as they are processed down at the Pentagon,” Goldenberg said in an emailed statement.

Those procedures are governed by Air Force instructions, which are different for officers and enlisted personnel, based on time in grade, years of service, military education, and their commander’s recommendation, Goldenberg said.

Briggs’ family could not be reached for comment Friday.

At the time of his death, Briggs was on leave from Newsday, where he worked as a security guard, according to the company’s human resources department.

Briggs joined the 106th as a part-time soldier in 2010, according to the National Guard, and had been on military leave from Newsday since he left for higher-level training at Lackland Air Force Base in February 2014.

Last week’s helicopter crash in Iraq, which came just shy of 15 years to the day after President George W. Bush first sent troops to Iraq in 2003, serves as a grim reminder that local National Guard members continue to serve in harm’s way.

Two days after the crash in Iraq, some 330 members of the Yonkers-based 101st Expeditionary Signal Battalion left to train for a deployment to Afghanistan scheduled within the next few weeks, Goldenberg said.

Some 200 New York Air Force National Guard members, which include members of the 106th Air Rescue Wing, “are serving overseas in support of contingency operations,” he said, although he did not specify how many of them are in Iraq or Afghanistan.