The skies over and around Syria are even emptier than usual as commercial flights avoid the area in expectation of... 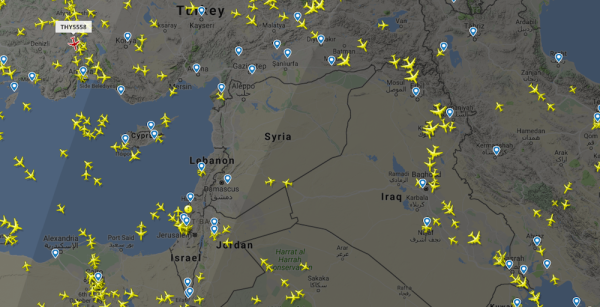 The skies over and around Syria are even emptier than usual as commercial flights avoid the area in expectation of a potential U.S. strike on the Assad regime.

Although flightpaths in the region have long avoided Syria itself, an even broader swath of airspace was vacated as tensions ramped up.

Flight regulator Eurocontrol told airlines on Tuesday to avoid flying over the eastern Mediterranean to avoid getting hit or their communications jammed.

Eurocontrol said: “Due to the possible launch of air strikes into Syria with air-to-ground and/or cruise missiles within the next 72 hours, and the possibility of intermittent disruption of radio navigation equipment, due consideration needs to be taken when planning flight operations in the Eastern Mediterranean/Nicosia FIR [Flight Information Region] area.”

Related: The Navy Just Called Bulls–t On Reports That A US Warship Is Lurking In Syrian Waters »

The eastern Mediterranean and the island of Cyprus, where Nicosia is the capital, are immediately to Syria's west.

Civilian flights over or near Syria are already rare. Most commercial airlines already avoid Syria's north and northeast — where major battlefronts such as Aleppo and Deir Ezzor are located — due to the ongoing conflict, Flightradar24 said.

However, Eurocontrol's Tuesday warning to avoid the eastern Mediterranean shows heightened expectation of a U.S. airstrike on Bashar al-Assad's regime.

Donald Trump is considering launching a punitive strike on Syria in retaliation over a reported chemical attack that killed dozens of civilians, for which he blamed Syria and Russia.

He is reportedly weighing a stronger strike than that of last year, when he ordered a strike of 59 Tomahawk cruise missiles on military infrastructure following reports of a chemical attack.

The U.S. president is skipping a major international summit in South America to weigh his options, and said on Monday that he would announce his decision shortly. Israel is reportedly anticipating a U.S. strike.