As Pentagon planners ready a possible military response to a suspected poison gas attack in Syria, one danger has sparked... 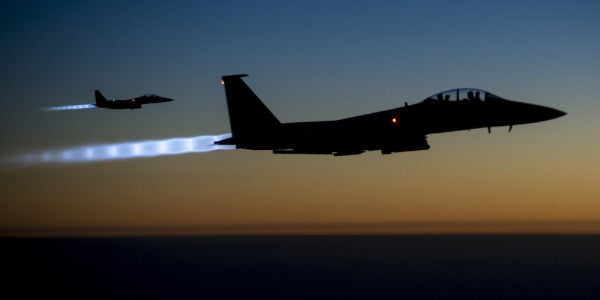 As Pentagon planners ready a possible military response to a suspected poison gas attack in Syria, one danger has sparked special concern — whether U.S. airstrikes may inadvertently kill Russian soldiers in Syria and escalate the regional war into a confrontation between Washington and Moscow.

The chances of a potential clash would increase if President Trump opts for a heavy bombardment, employing not only Tomahawk cruise missiles fired from Navy ships offshore — as he did last year after a previous chemical attack — but also manned bombers and other warplanes to strike multiple targets in Syria, current and former officials say.

Although Trump said Monday that he would make a “major decision” in 24 to 48 hours, the timing of a U.S.-led strike could be delayed by Syria's announcement Tuesday that it will allow international chemical weapons inspectors into the country to investigate Saturday's attack, which left about 50 people dead in the rebel-held town of Duma, as well as by the need for the Pentagon and U.S. allies to get sufficient military forces in place.

Related: Trump And Mattis To Syria: Brace Yourselves »

Trump canceled his planned trip to Colombia and Peru, which was scheduled to start Friday, so he could focus on the crisis. He spoke Tuesday with British Prime Minister Theresa May and French President Emmanuel Macron and the White House said they “agreed not to allow the use of chemical weapons to continue,” suggesting a joint operation is being planned.

Clearly neither Moscow nor Washington wants a direct conflict in Syria. The U.S. has about 2,000 troops deployed chiefly in the country's north, where they support Kurdish troops fighting Islamic State. The Pentagon uses a so-called deconfliction hotline from its air base in Qatar to make sure U.S. and Russian aircraft avoid each other in Syrian airspace.

The Russian military contingent in Syria is slightly smaller — estimated at fewer than 2,000 troops and fewer than 100 warplanes. So the U.S. and its allies could carry out targeted reprisals on Syrian military targets with limited risk of causing Russian casualties, especially if the U.S. warns Moscow ahead of the strikes, U.S. officials say.

But Trump has raised the possibility that Moscow could face some sort of retaliation as well, warning Tuesday that Russia or any other nation found to share responsibility with Syria for the suspected gas attack would “pay a price.”

Pentagon officials are probably urging Trump to target factories where Syrian President Bashar Assad's forces are preparing chlorine and other chemical agents used against rebels and civilians, assuming those are known.

They also probably would target the Syrian security units that carried out last weekend's attack, reportedly using helicopters to drop barrel bombs, and the government's command and control facilities, said Derek Chollet, a former senior Pentagon official who worked on Syria in the Obama administration.

“Most likely what the U.S. will do is warn the Russians in advance and then use missile strikes to target Assad regime facilities of some sort” instead of a wider bombing campaign, said Ilan Goldenberg, a Syria expert at the Center for a New American Security, a Washington policy analysis organization.

Related: How Russia And The United States Could Go To War In Syria»

Pentagon officials would be wary about telling Russia the timing or targets of an air raid, fearing Moscow would pass the intelligence to Assad's forces and help them shoot down allied jets.

The U.S. also could use radar jamming and low-level aircraft to defeat the Syria defenses. U.S. warplanes have flown over Syria for four years to find and destroy Islamic State forces, said Chollet. None have been shot down.

“There's a lot we know” about Assad's air defenses, said Chollet. “So we're much more capable of managing the risk to our planes.”

To reduce the risk, U.S. warplanes could launch so-called long-range “standoff” air-to-ground missiles, which are capable of striking Syrian targets without the pilot entering the nation's airspace.

Israel has used those missiles repeatedly in recent years to strike Syria, most recently on Monday when missiles slammed into an air base in central Syria. Israel has not confirmed launching the attack, which reportedly killed 14 people, including seven Iranians.

The Navy has a destroyer armed with cruise missiles in the eastern Mediterranean, and U.S. warplanes based around the region could be used for a major air campaign, Pentagon officials said.

An aircraft carrier strike group, including the carrier USS Harry Truman as well as a guided-missile cruiser and four guided-missile destroyers, is due to leave Norfolk, Va., on Wednesday for the Middle East. But it won't be in position to launch attacks on Syria for at least a week, officials said.

Syrian government forces and their allies were on alert Tuesday and taking precautionary measures at military bases and posts in government-held areas amid fears of a U.S. strike, war monitors said.

Hundreds of Russian contractors and mercenaries are reported to be working in Syria. On Feb. 7, U.S. airstrikes hit a Syrian-backed militia as it approached a valuable oil and gas field held by U.S.-backed forces in eastern Syria. Russia later acknowledged that five of the dead were Russian citizens, but the incident drew little attention and Moscow did not publicly complain, in part because the deconfliction line was used to try to warn the column away.

Related: Trump Finds Himself Trapped Again By A War He Campaigned Against »

If any Russians are killed in U.S. reprisals for Saturday's attack, Moscow could step up harassment of U.S. warplanes and outposts in the region, former officials say.

Both Syria and Russia insist the chemical attack did not happen and that graphic photographs of the victims were staged. Russian officials have also threatened unspecified repercussions if the U.S. and its allies carry out their plans to attack Syria.

“We know a substance was used but we don't right now know exactly what,” she said. “Only certain players have these weapons … and delivery systems.”