"When a rocket strikes that's one thing; but a ballistic missile, it's like terror." 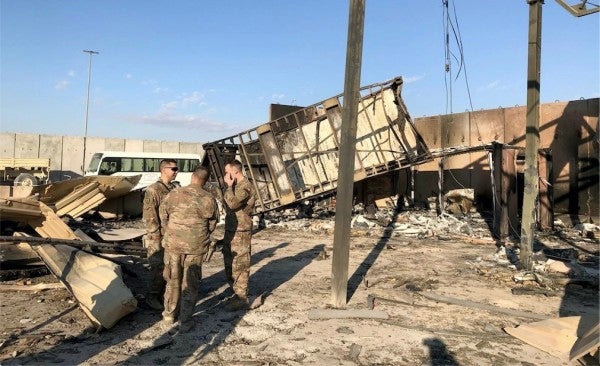 AIN AL-ASAD AIR BASE, Iraq (Reuters) – Troops at the Iraqi air base that bore the brunt of Iran's first direct missile attack against U.S. forces said they were shocked by its intensity and grateful to emerge unscathed.

The scale of the damage at the Ain al-Asad base showed Iran's destructive capability at a time when U.S. officials say they are still concerned that Iran-backed groups across the region could wage attacks on the United States.

“It's miraculous no one was hurt,” Lt Col Staci Coleman, the U.S. air force officer who runs the airfield, told reporters on Monday at the vast base deep in the western Anbar desert in Iraq, where 1,500 Americans were deployed. “Who thinks they're going to have ballistic missiles launched at them … and suffer no casualties?”

The killing raised fears of a new Middle East war, but the United States, Iraq and other countries with troops at the base said no one was hurt. U.S. military leaders have said that was thanks to commanders on the ground, not Tehran's goodwill.

At one site, a cruise missile had left a large crater and incinerated living quarters made from shipping containers.

Heavy concrete blast walls were knocked over and the shipping containers were smashed and charred along with contents including bicycles, chairs and other furniture. Several soldiers said one of their number had come very close to being blown up inside a shelter behind the blast walls.

Almost a dozen missiles hit the air base, where U.S. forces carried out “scatter plans” to move soldiers and equipment to a range of fortified areas apart from one another.

The United States did not have Patriot air defenses at the base, putting the onus on local commanders to protect their troops.

“We'd got notification there could be an attack a few hours prior so had moved equipment,” said U.S. Staff Sergeant Tommie Caldwell.

Lt Col Coleman said that by 10pm all the staff she manages were ready to take cover. “People took this very seriously,” she said.

Three and a half hours later the missiles started arriving. Several soldiers said they continued for two hours. Staff Sgt Armando Martinez, who had been out in the open to watch for casualties, said he could not believe how easily one missile leveled the concrete blast walls.

“When a rocket strikes that's one thing; but a ballistic missile, it's like terror,” he said. “You see a white light like a shooting star and then a few seconds later it lands and explodes. The other day, after the attack, one colleague saw an actual shooting star and panicked.”

One missile landed on the tarmac of a parking and servicing area for Blackhawk helicopters helping to ferry equipment in the fight against Islamic State insurgents. The helicopters had been moved but it destroyed two light hangars and badly damaged portacabins nearby.

“We must have been in the bunkers for more than five hours, maybe seven or eight,” said Kenneth Goodwin, Master Sgt in the U.S. Air Force. “They knew what they were aiming at by targeting the airfield and parking area.”

It was the latest strike against an air base that has figured prominently in high-ranking U.S. officials' visits to Iraq.

“After these missile attacks, when we hear of possible militia rocket attacks, we tend to think, 'Oh only rockets … that's a change',” Coleman said, describing the common feeling when the missile attacks were over as “sheer relief”.

Coalition troops said the attacks did not strike them as a display of restraint from Iran. As one U.S. Air Force officer put it: “If you fire missiles at an air base where people are maintaining aircraft 24/7, you're probably going to kill people.”

Where did the warning come from

Such accounts add to the evidence that the Iranian attack was among the worst kept secrets in modern warfare – but the reasons why remain mysterious after days of conflicting statements from officials in Iran, Iraq and the United States.

After the missiles landed, several major U.S. media outlets quoted U.S. officials saying the attack had been little more than a warning shot, allowing Iran to satisfy calls for revenge at home – after the U.S. air strike on Jan. 3 that killed an Iranian general – without much risk of provoking further U.S. attacks. Others, citing U.S. and Arab sources, reported that Iran warned Iraq before the attacks and that Iraq had passed that information to the United States.

By Friday, however, top U.S. officials had rejected that narrative. U.S. Secretary of State Mike Pompeo told reporters that day that there was “no doubt” that Iran had the “full intention” of killing U.S. personnel. That echoed earlier comments from Mark Milley, chairman of the joint chiefs of staff, who credited U.S. intelligence – rather than warnings or leaks from Tehran – with the advanced notice that allowed U.S. troops to avoid casualties.

The ongoing confusion over Tehran's intentions makes it that much more difficult to judge its true appetite for further attacks on U.S. forces or an all-out war. A series of conflicting statements from Iranian officials has only added to the uncertainty. Even as Iran state TV falsely claimed the attack had killed dozens of U.S. soldiers – and Supreme Leader Ayatollah Ali Khamenei declared it “not enough” of a punishment – Foreign Minister Mohammed Javad Zarif soon after tweeted that Iran had “concluded” its retaliation and “did not seek escalation or war.”

Amir Ali Hajizadeh, head of Iran's Revolutionary Guards' Aerospace Force, was later quoted in state media saying, “We did not intend to kill. We intended to hit the enemy's military machinery.” And yet Hajizadeh repeated the spurious claim that the attack had killed U.S. soldiers.

An advisor to Iraq Prime Minister Adel Abdul Mahdi told Reuters that Iran did not directly notify Iraq until shortly before the missile strike – but said Iran passed warnings through other countries. The advisor said both Iraq and the United States were warned of the impending strike by one Arab country and one European country, declining the name them.

And who warned those countries?

“Iran, obviously,” the adviser said. “Iran was keen that both the Americans and Iraqis be aware of the strikes before they occurred.”

On Sunday the Iraqi military said four people had been wounded in an attack on Balad air base in northern Iraq, which also houses U.S. personnel. Military sources identified the wounded as Iraqi soldiers.