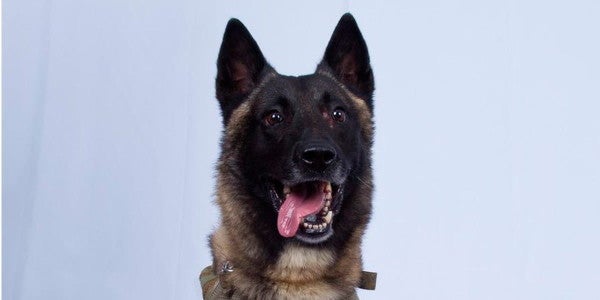 Sen. Bob Menendez, the lawmaker responsible for introducing legislation to create the Defense Department's first official award for military working dogs, sent a letter last week to Defense Secretary Mark Esper, advocating for speedy commendations for the handlers and dogs involved in the Oct. 26 raid — most notably the Belgian Malinois that chased Baghdadi into a tunnel before he detonated a suicide vest.

“Military Working Dogs and their handlers have become integral to the defense of our nation. If we, as a nation, can strap a Kevlar vest on a dog and send them into battle, then we should be able to honor these guardians of freedom and their handlers with the recognition they deserve,” Menendez said in a news release Thursday.

“I can't think of any K9 team more fitting for this honor that Conan and his handler,” he wrote, referencing the dog's name, which has not been publicly verified.

Newsweek was first to report the dog's alleged name, which was subsequently mentioned by President Donald Trump on Twitter. However, the Pentagon maintains the name is classified for security reasons.

Last week, Trump tweeted a doctored photo of the dog receiving the Medal of Honor, the nation's highest award for valor. It melded an image of the president presenting the medal to Army medic James McCloughan, who was the first person to be awarded the MoH by Trump in 2017, with a photo of the dog.

“The President's Twitter stunt only undermines their service and sacrifice,” Menendez said of the photo. “Instead of giving them a fake medal, let's bestow these heroes with the official recognition they deserve.”

In the letter, the lawmaker also requested that Esper provide an update on how each service has awarded dog handlers since the program's inception.

Chairman of the Joint Chiefs of Staff Gen. Mark Milley announced last week that the dog was injured during the two-hour nighttime raid on a compound in northwestern Syria, but was recovering. The dog had returned to its duties in the region by Oct. 28.

Belgian Malinois is the same breed used in the 2011 raid to take out Osama bin Laden, the terror leader behind the Sept. 11, 2001, attacks. That dog, named Cairo, helped secure the perimeter and sniff out bombs around the house where a Navy SEAL team killed bin Laden.

Since Trump announced the raid, interest in the breed — known for its vigilance and high energy — has skyrocketed.

According to a report from TMZ, Ruidoso Malinois, a popular Belgian Malinois breeder that supplies the dog to first responders, has received dozens of calls, with one man even offering $85,000 for a new puppy.

But experts warn the breed may not be for everyone.

“With a high drive comes an extreme amount of training that needs to be done with dog,” Sgt. Nick Hall, a handler with the Bay County Sheriff's Office, told Florida's WMBB-TV. “Otherwise, you'll have a dog running rampant in your home, tearing things up.”