He was trying to photograph a plane takeoff during a Navy exercise. The plane ended up nailing his head

A Bald Mountain Air Service plane took off for Deadhorse as part of a Navy submarine exercise before it struck an Arctic Submarine Laboratory employee on the head, nearly ripping off his scalp, according to a National Transportation Safety report 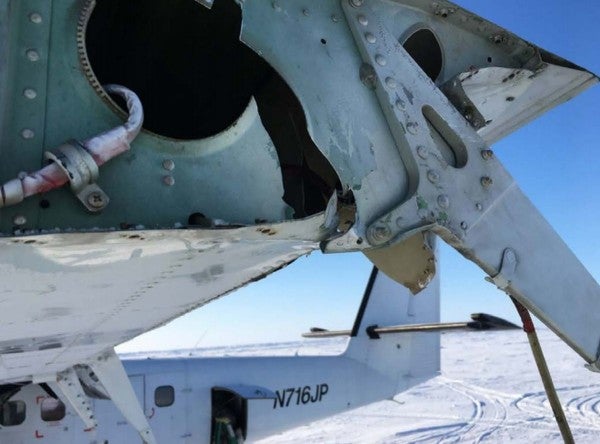 Travis Major thought he had an understanding with the pilot about to take off from an ice airstrip near Deadhorse during a U.S. Navy submarine training exercise last year.

Major told federal investigators he figured he'd be safe along the floating runway while taking a picture of the plane's departure framed by Lego figures on a snow berm — a souvenir for his children.

The Bald Mountain Air Service plane took off for Deadhorse with two pilots and three passengers — researchers involved in the military exercise — around 7:45 that March evening.

But instead of providing a photo opportunity, witnesses told the National Transportation Safety Board, the plane made a low turn and struck Major on the head, nearly ripping off his scalp, according to the agency's final report on the incident released recently.

A probable-cause determination is expected within two or three weeks, according to Clint Johnson, the NTSB's Alaska chief and investigator on the incident.

Major, who works for the Arctic Submarine Laboratory, ended up OK. He told Johnson during an interview at Providence Alaska Medical Center that he didn't remember anything about the accident.

Bald Mountain did not respond to a request for comment.

The de Havilland DHC-6 Twin Otter turboprop was damaged to the extent it couldn't be flown off the ice and wasn't recovered for more than a month.

The bizarre accident revealed a world most Alaskans rarely see: military research and training on the ice of the Arctic Ocean.

Bald Mountain was providing support for the U.S. Navy ICEX 2018 exercises, which was wrapping up after five weeks. The annual exercise involved submarines from Washington and Connecticut as well as a sub from the U.K. Royal Navy. The U.S. subs fired unarmed training torpedoes that divers recovered.

The pilot involved in the incident later told investigators he didn't recall any conversation with Major about taking photos at the end of the runway. A second pilot declined to speak directly to investigators and provided a written statement instead. He said the takeoff occurred at a time of evening that makes it “hard to differentiate shapes and distances in the white light of the arctic.”

The company filed an accident report as part of the NTSB docket. It said that a normal departure, rather than the “short field departure” that had the pilot turning left where he did, would have avoided the incident.

Witness accounts describe a clear understanding between Major and the pilot before takeoff.

One witness said he saw Major give the pilot a “thumbs-up” sign.

Another colleague said Major was kneeling behind a 4-foot berm when the plane took off and leveled off near the ground, according to a witness account collected by the Federal Aviation Administration. The man and another researcher waited about 60 feet away on snowmachines, ready to take Major back to camp after he took photos.

The man said to his colleague, “Wow, he's staying really low,” according to the account. He told the FAA that the plane accelerated and then, about 150 feet from the kneeling man, made a very fast bank to the left like a plane that “waves its wings” on a flyby.

The account continued: The left wing came down and there was a big “poof” of snow. Major fell back to his right side, his head laid open. His scalp “was laying back like a toupee,” the man told FAA.

Major was still conscious and kept asking what happened. The other man got help and came back with the Navy camp doctor. The men loaded Major into a helicopter for a flight to Deadhorse.

One of the three passengers in the plane, a sea ice researcher for the Army Cold Regions Research & Engineering Lab, told the FAA the plane “dipped a wing” and flew toward the people standing by the runway. “He said it 'had the appearance of cowboy flying', and fits with that type of culture that he has occasionally observed in the past. It looked like they were trying to fly close to the people.”

The plane came back around and landed, and the man described “blood everywhere. It looked like a fatality, and both pilots were ashen white in the face.”

Several witnesses described what they thought was overloading in the plane, though cargo weight and distribution are not mentioned in the NTSB section of the report.

Major doesn't remember the actual strike, according to his account.

But he told Johnson he talked with Gambucci just before he took off about where he could safely position himself. He was also encouraged by a prior takeoff of another operator's plane that a different person photographed safely.

Major said he got down on one knee and set up his props.

“After a short period, I looked up and saw the plane in an unexpected position coming down the runway. Essentially, I was able to quickly triangulate the height, speed and angle, and realized this is not what was originally planned,” he told the investigator. “I don't remember anything after that except brief moments during the helicopter transit to Prudhoe Bay.”