"After all the research we've done trying to find somebody with that last name, he's the only one." 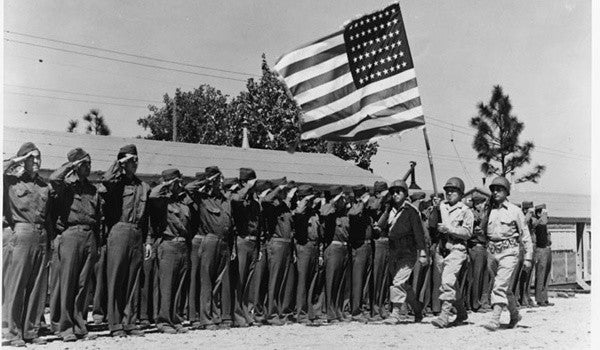 Albert Nakama remembers the Vosges Mountains and how cold it was in late 1944 when his unit, L Company of the 442nd Regimental Combat Team, reached northeastern France in World War II.

The Kaneohe man was part of the mostly Japanese American force, many from Hawaii, that set out to prove their loyalty to America in blood and sweat fighting entrenched German forces in Europe.

He remembers Italy in the spring of 1945 and soldiers climbing up steep Mount Folgorito at night on hands and knees to surprise sleeping Germans at the top to help break the “Gothic Line.”

That's where Nakama was shot in the buttocks — “right on the right cheek,” he said with a laugh.

Somewhere along the way, Nakama was struck in the forehead by a glancing bullet. He was wearing his helmet at the time, which protected him.

“All I know is I got shot here,” he said, pointing to his head. “But I never fall down.”

But the former infantryman doesn't remember the long green Army trench coat — the one with “A Nakama” handwritten on the back — that was bought from an old farmer in more recent years near Bruyeres, France, a town that the 442nd and 100th Infantry Battalion liberated.

And therein lies an ongoing mystery that saw in the hope that Nakama could add a bit of detail to the famous history of the 442nd in France.

For Nakama, who lives at Pohai Nani in Kaneohe, the memories are fleeting now and come in bits and pieces.

But others have pieced together Nakama's remarkable story — one of many tales of nisei soldier bravery and determination that are still very much celebrated in France.

Chris Sketchley, museum curator with the Nisei Veterans Committee Memorial Hall in Seattle, who brought the trench coat to Hawaii for Nakama to examine, said that in Bruyeres “they have the 442nd unit patch painted along the streets and walls” as part of a tour route.

A lot of businesses use “442” in their phone numbers, and schoolchildren still learn Hawaii grade school songs.

“They have plaques all over the walls of lots of the buildings talking about the 442 clearing the town” of Germans, Sketchley said.

So when a French farmer in his 90s was spotted wearing an old GI coat with “A Nakama” on the back, it spurred immediate interest. The jacket was purchased for $15 and ended up with the Seattle nisei vets hall.

Sketchley said he's pretty sure the coat belonged to the Hawaii resident during the war. In fact, the Albert Nakama who lives here is the only Nakama whom Sketchley's group could find in 442nd rosters.

“After all the research we've done trying to find somebody with that last name, he's the only one,” he said. “The odds that it's somebody else's — I mean, we had a bunch of researchers who are really good at finding people come up with dead ends everywhere. The fact that he's the only guy with that name, the odds of it being somebody else is really slim.”

His goal in bringing out the trench coat is “to have a story to go behind the jacket” when it's displayed in Seattle.

The number that follows Nakama's name on the coat — 105990 — is just another mystery.

“We don't know what that number means,” Sketchley said.

But there is a theory of how the jacket may have ended up on a French farm.

“When the 442nd was in France, they fought in one of the worst winters in recorded history there. It was just miserable rainy, snowy, miserable, wet, muddy weather,” Sketchley said.

The nisei soldiers didn't have winter gear because they had come from milder Italy, he said.

“They didn't get their winter equipment until about the end of their fighting in the French forest,” he said. “So a lot of the guys were crafty, and they started trading for things to get better jackets, better equipment, and were always swapping things.”

A hole in the forehead area of the hood— designed to fit over a helmet — matches Nakama's description of the ricocheting bullet that hit him.

In the spring of 1945 in Italy, to take on the Germans' mountaintop observation posts, the 100th and 442nd made the hard climb at night.

“We had to use both hands and knees to get up,” said Nakama, who graduated from Benjamin Parker High School in 1941 and joined the 442nd in 1943.

In an account of the battle, Masaharu “Oki” Okumura wrote that he and Nakama were getting battered by artillery fire when Nakama said, “'Let's go!' and we scampered up that hill as fast as we could go.”

“I saw bullets following Nakama's heels all the way up, and I'm sure some were aimed at me,” Okumura said.

Nakama's daughter, Iris Chang, is among those trying to piece together her father's service history. After the war he went to work for U.S. Customs and Border Protection, she said.

Sketchley said Nakama served in four campaigns in France and Italy, earning two Bronze Stars: one for fighting near Pisa, Italy, and another in France — a few more pieces of the puzzle about a nisei vet who never talked much about his service.

“He saved his tech sergeant,” Sketchley said of the medal earned in France. “He and two buddies went out into fire. There was a lot of machine guns and things flying at them, and they went under heavy fire to save one of their men.”