The disturbing prevalence of sexual assault in the U.S. military is no secret. As the 2014 RAND Military Workplace study... 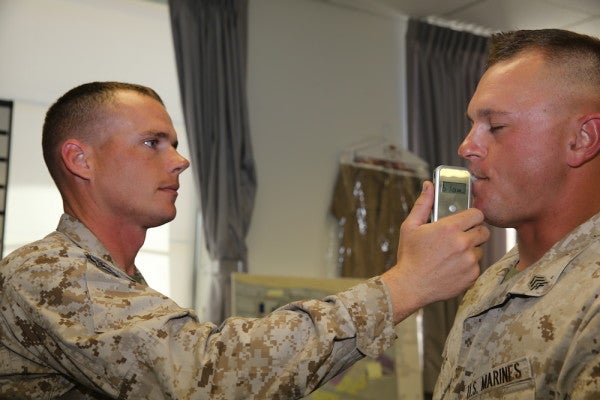 The disturbing prevalence of sexual assault in the U.S. military is no secret. As the 2014 RAND Military Workplace study estimates, 20,000 of the military’s 1.3 million active-duty service members were the victims of at least one sexual assault in the past year, comprising 4.9% of women and 1% of men. But the true nature of the role alcohol plays in many of these sexual assaults is less known, due to misleading stereotypes.

Almost half of female service members who reported being sexually assaulted in the past year said they or their assailant had been drinking alcohol, reported the RAND Corporation in 2014. One-fifth of male sexual assault victims in the military also reported the involvement of alcohol. That sobering alcohol statistic is more alarming given the fact that alcohol misuse is particularly common within the military, with a third of active-duty service members reporting binge drinking, according to RAND.

In May, outgoing Secretary of Defense Chuck Hagel announced a review of the military’s alcohol policies, “to address risks that alcohol poses to others, including the risk that alcohol is used as a weapon against victims in a predatory way,” he said. The DoD’s report the on sexual assault prevention and response released in November 2014 uses similarly severe rhetoric to highlight the relationship between alcohol and sexual assault, stating, “In some cases, offenders use alcohol as a weapon to incapacitate potential victims.”

One civilian prosecutor arguing that alcohol is used as a weapon in sexual assault cases is Katharina Booth, chief trial deputy of Colorado’s Boulder County district attorney’s office and head of its sexual assault and domestic violence unit. “When you’re talking about the offender using alcohol as a way to gain entry to their victim, to get their victim into a vulnerable state to incapacitate them, that’s exactly what it is — they’re using it as a means of a weapon to get that access where they otherwise wouldn’t have that access,” said Booth, in an interview with Task & Purpose.

Law enforcement in Boulder County could potentially make such an argument in the ongoing case of 21-year-old Air Force Academy cadet Daniel Ryerson, arrested last month by Boulder police for allegedly sexually assaulting an intoxicated female classmate after a night of heavy drinking. Booth, however, declined to speak with Task & Purpose about any specific ongoing investigations.

Sexual predators who repeatedly feed drinks to unsuspecting victims with intent to commit sexual assault use alcohol as a weapon in two ways, according to Booth: to incapacitate them physically and mentally during the assault, and to discredit them if they go to the authorities.

Booth said she hopes the alcohol-as-a-weapon argument will help put an end to a culture where rape victims are blamed for their actions when alcohol is a factor. “It’s trying to focus the blame where the blame should be, which is on the offender and their behavior rather than the victim and how much they drank,” Booth said.

Booth isn’t arguing that alcohol should be legally defined as a deadly weapon in sex assault cases in the same sense as a knife held to a victim’s throat. “Legally, there’s not going to be a legal definition that goes into encompassing alcohol as a per se weapon,” Booth said. “But besides that, I still stand by my statement that alcohol is a weapon that is used in sexual assaults, and that is true; there’s a very close connection between alcohol and sexual assault.”

Merely calling alcohol a weapon can help show predatory intent and encourage judges to view it as an aggravating factor when sentencing a defendant, Booth said.

Such rhetoric will also help Booth and other prosecutors shatter the myth that typical sexual assaults involve assailants jumping out of bushes wielding a gun or knife. In a 2009 study by researchers at the Naval Health Research Center and Northern Illinois University of newly enlisted male U.S. Navy personnel who self-reported having attempted or “completed” rape in their lifetime, 61% said they used alcohol or drugs as their method for subduing their victims, compared with 23% who reported using force or the threat of force, and 16% who used both substances and force. As for their relation to the victims, 75% of the respondents reported targeting only people they knew and another 18% reported targeting both strangers and people they knew.

Because repeat offenders in the study overwhelmingly reported using one type of method and targeting one type of victim, the authors were able to note that “the stereotypical rape incident characterized by a man violently attacking a stranger was not reported by any of the respondents.”

Fortunately, the U.S. military seems to be aware of these findings. “As in the civilian sector, and contrary to common perception, most sexual assaults are perpetrated by someone known to the victim,” states the main section of the November 2014 Department of Defense report. “While some sexual assaults can be perpetrated by strangers in attacks that leave the victim visibly injured, most crimes occur between people who know each other, often involving alcohol, and limited to few, if any visible injuries.”

Retired Col. Don Christensen, former chief prosecutor for the U.S. Air Force and president of the sexual assault advocacy non-profit organization Protect our Defenders, agrees that such rhetoric could help change public perception and result in more severe sentencing. “It is a game-changer,” he told Task & Purpose. “It does help as prosecutors make people think in a different way.”

But prosecutors must face the obstacle of proving exactly how the victim got intoxicated in the first place and whether the defendant played an active role, he added. “If you’re going to call it a weapon it would be easiest to prove if you can show they were the ones feeding the drinks to them, or in fact drugged them in some way,” Christensen said.

Even if alcohol may never be legally defined as a weapon, comparing it to a weapon in every other sense of the word can help debunk the myth that sexual assault typically occurs when an armed assailant physically attacks a stranger. If the military and prosecutors like Booth continue to emphasize this link, they can arm servicemembers with the knowledge to protect themselves and prevent others from inappropriately blaming victims when alcohol is involved.